Oh man, I am behind on my blog posts. The house is coming together at lightening speed and we are 24 days until move in!!! I am there bi-weekly making big and small decisions….not to mention my son is sick (isn’t everyone’s kid sick?!), my husband is travelling, and I am one worn out mama. Anyways, there is so much to fill you in on but the room that’s making a ton of progress lately is the master bath. 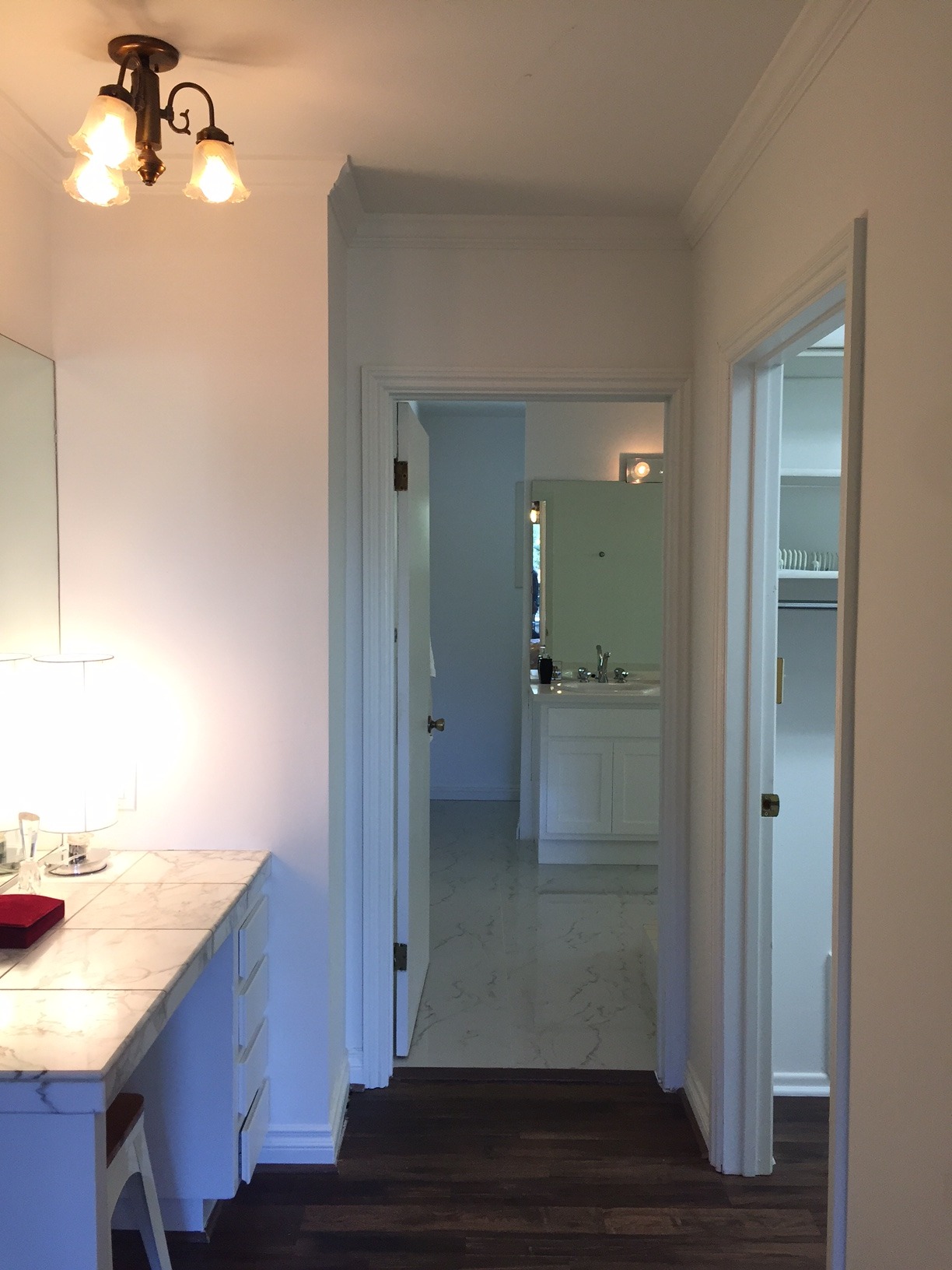 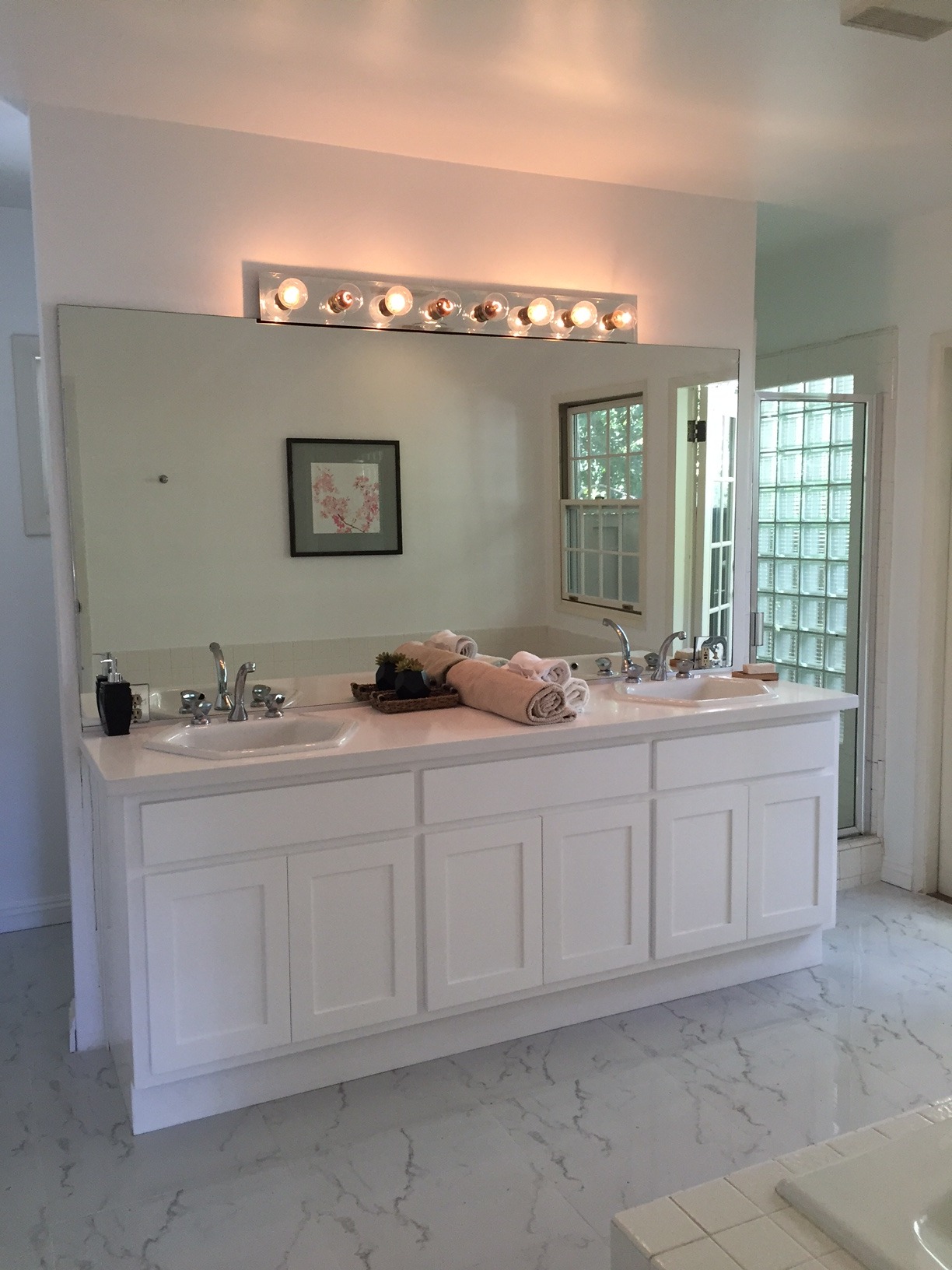 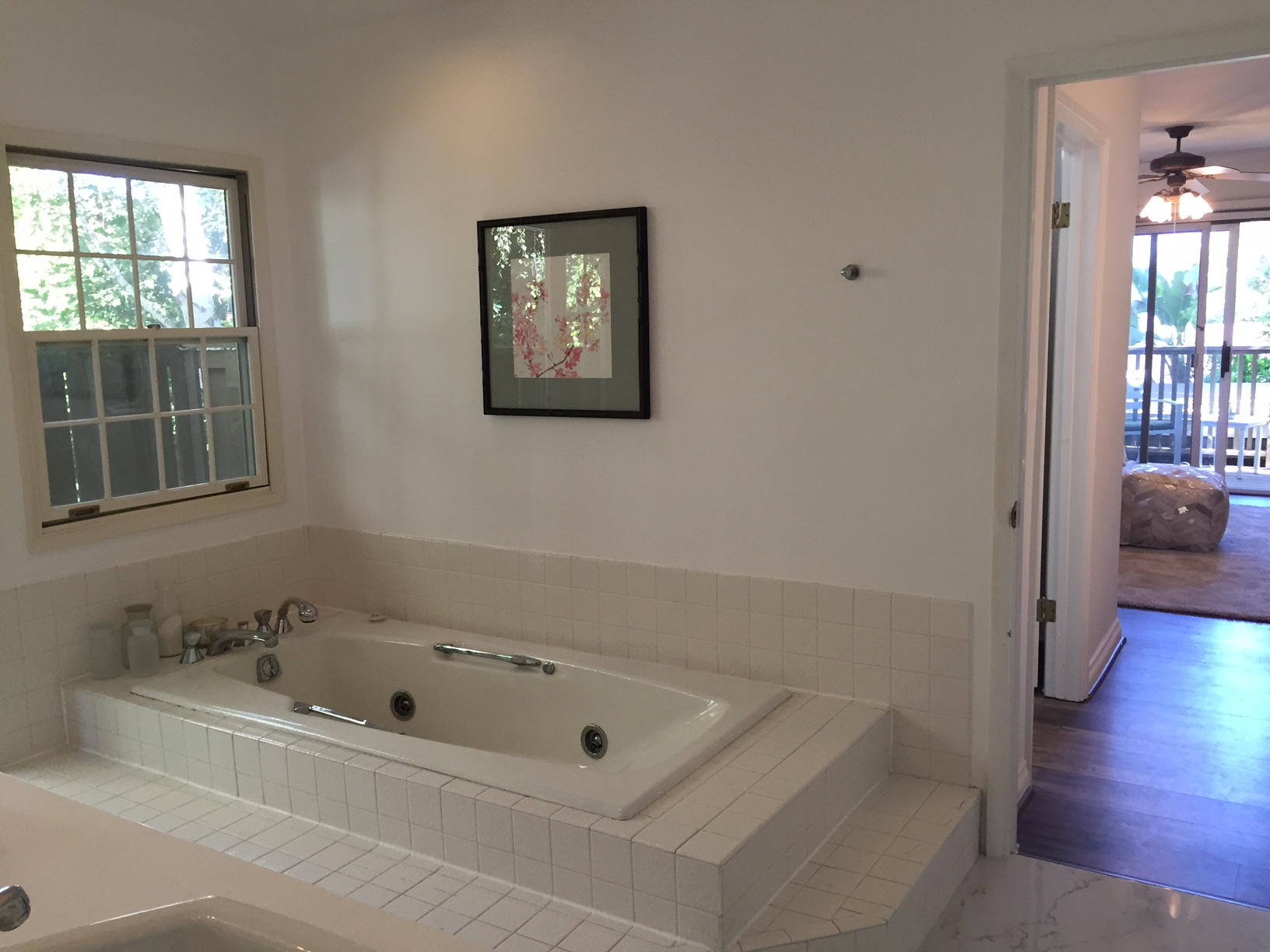 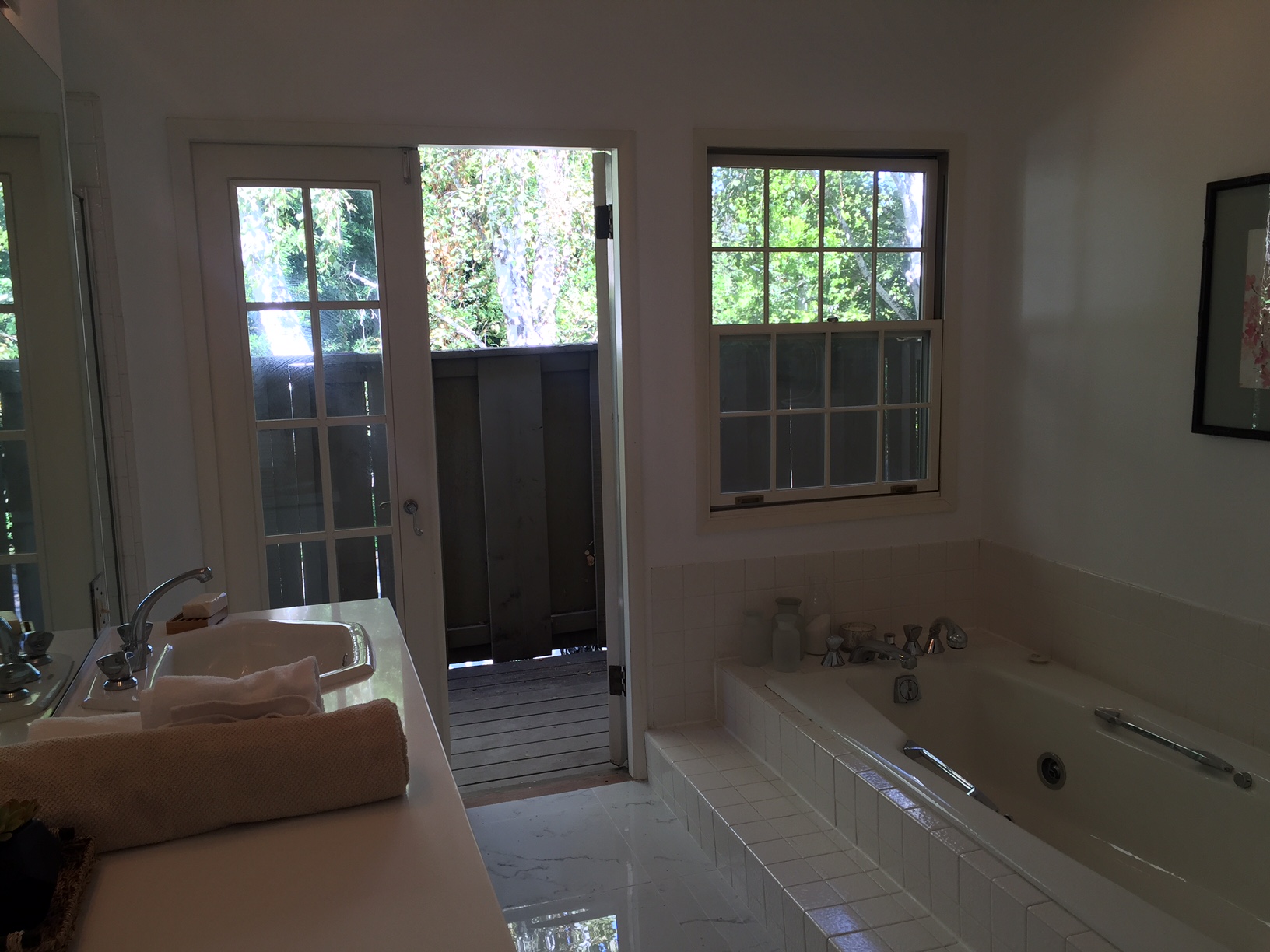 So the plan was: demo everything, remove all windows/French doors/transom windows, as well as removing the balcony that was so unnecessary and awkward. We moved the window that was previously over the tub to where the balcony doors were so we do have one window in the space. Well all went according to plan, except for the fact that the subfloor under the existing shower was extremely rotted from water leakage and had to be replaced, which only means we had to replace the subfloor which cost money!

Once demo and repairs were done, the framing went up and I was SO pumped to see how big that shower was gonna be: 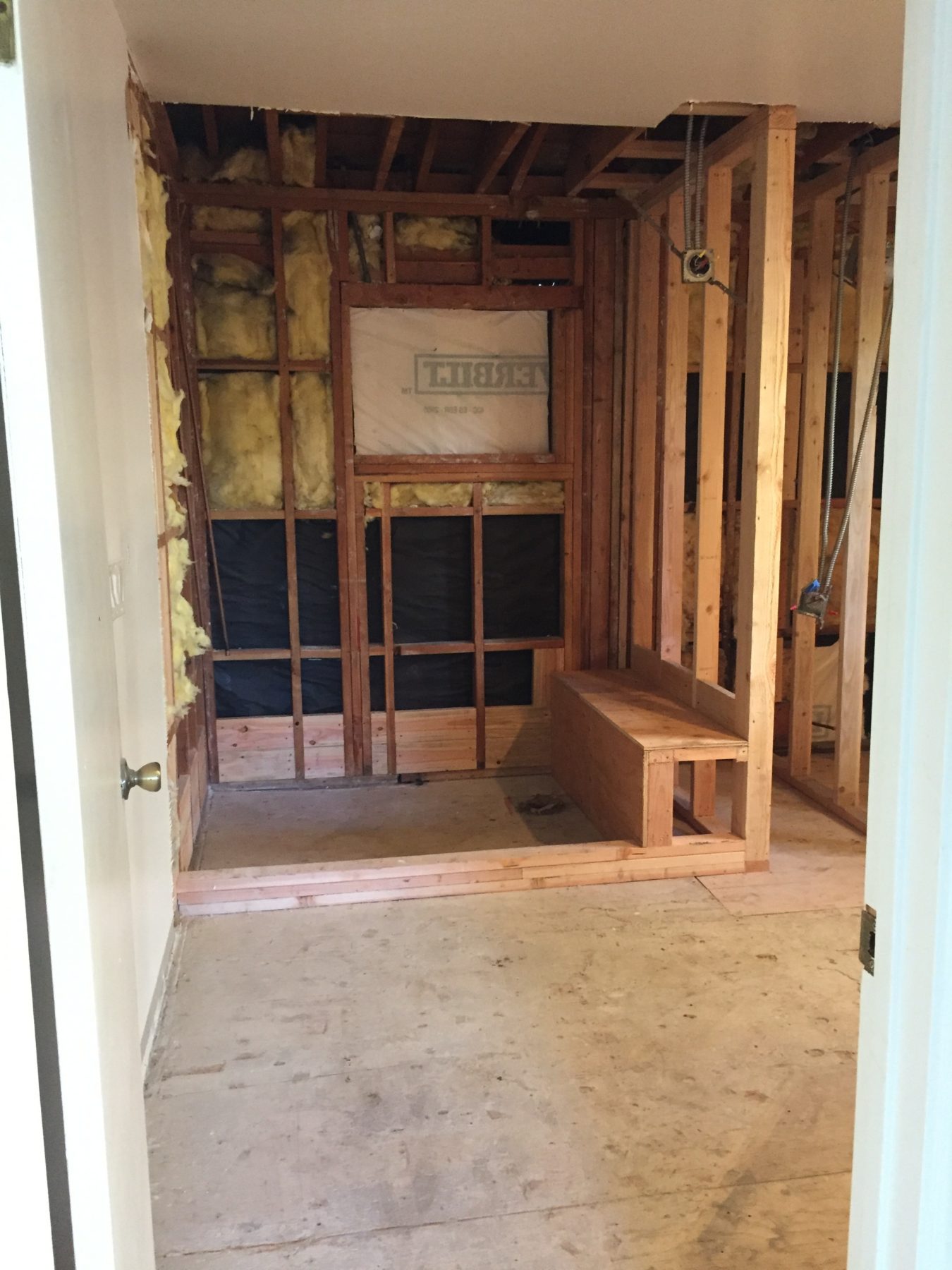 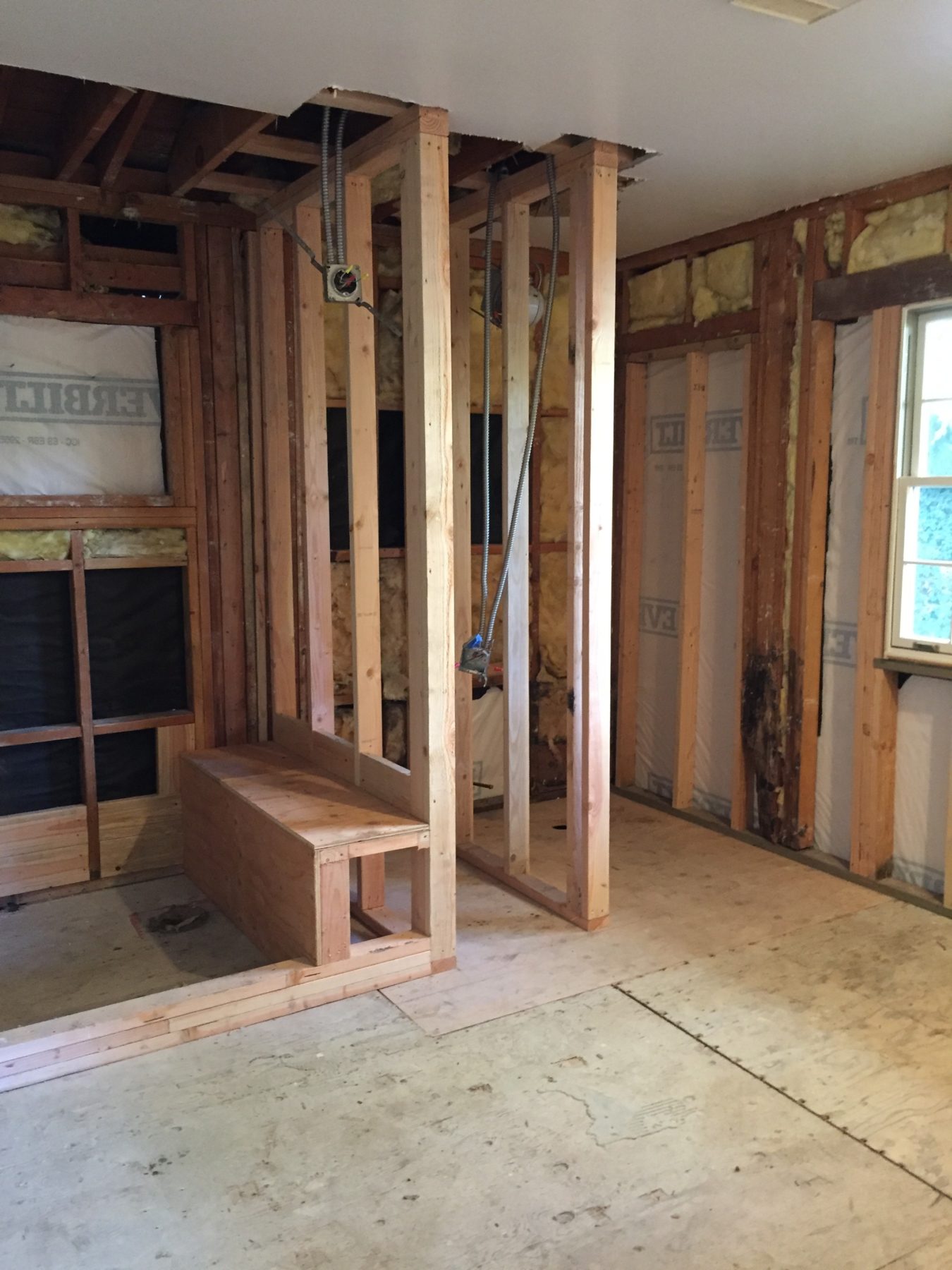 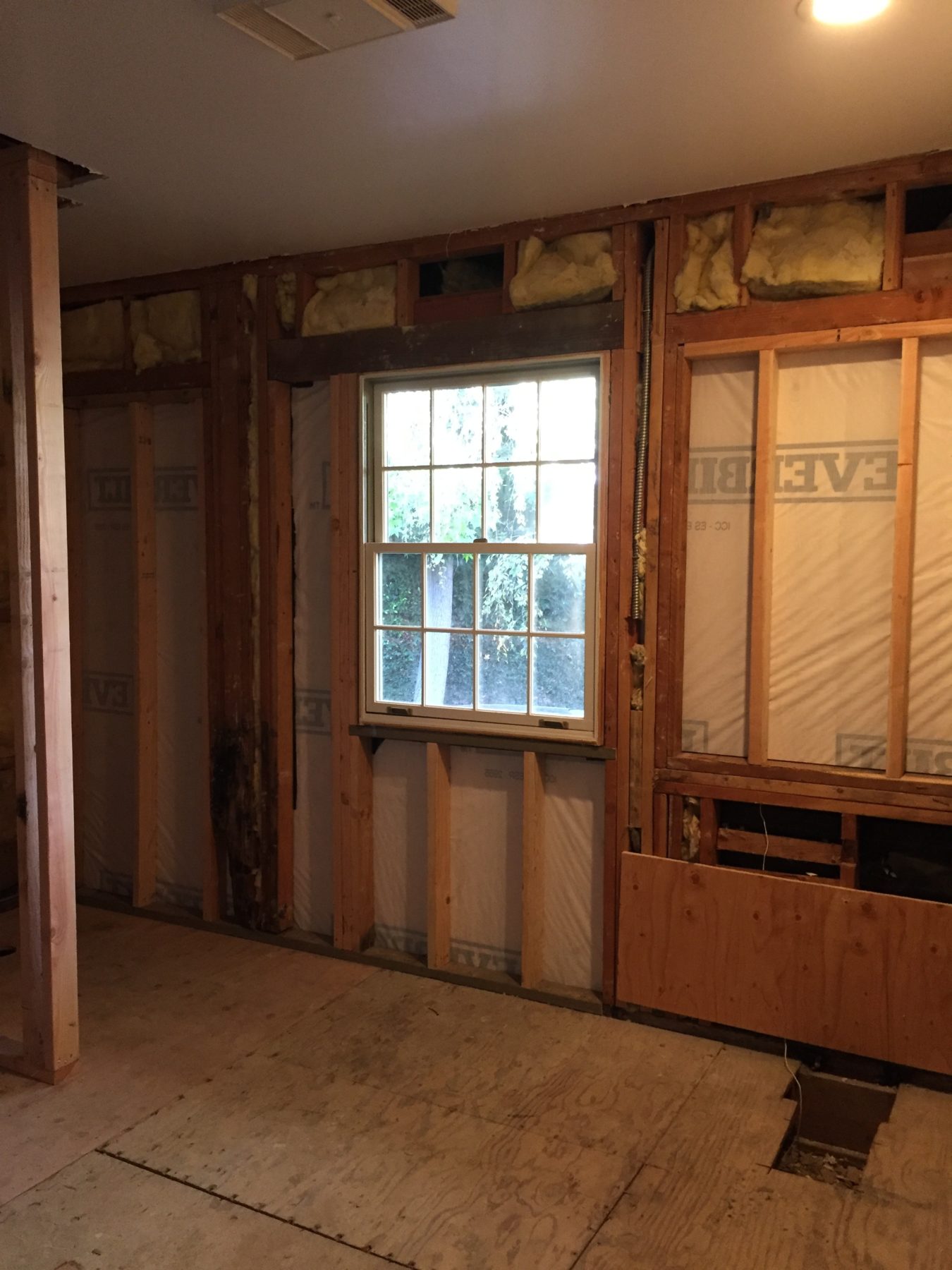 Moving on to the design of the space – I touched on this in another post but here is a more detailed description. Here is the design board I made for myself as we began selecting finishes so I could keep things straight in my head: 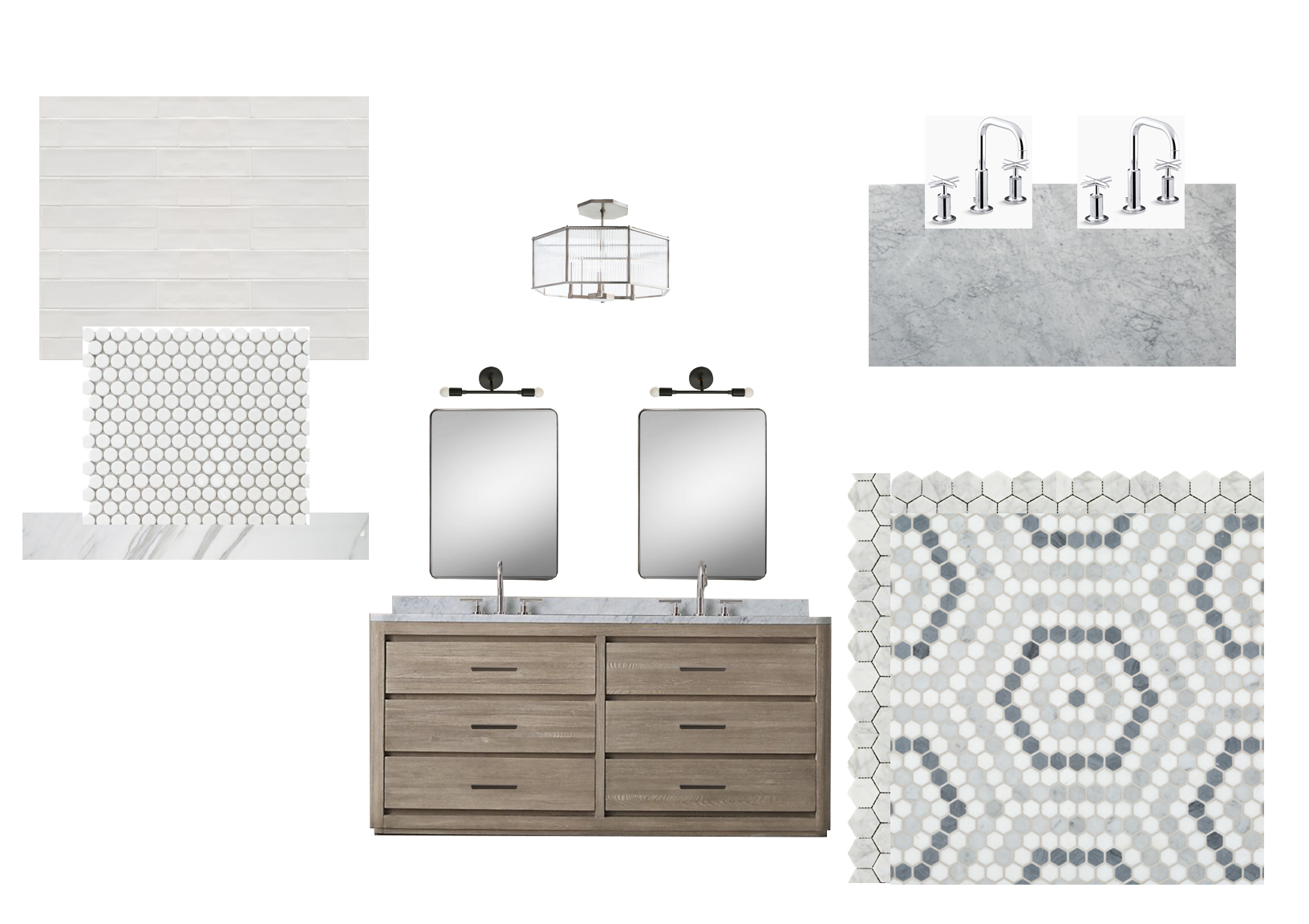 This gives you a good idea of the overall concept – mosaic hexagon flooring w/ carrrera hex border, natural wood vanity w/ Carrera slab top and chrome fixtures, assortment of white stone/tiles in shower with varying textures. The mirrors/lighting/hardware are TBD but I am really thinking I will add some black or dark bronze into the mix. That vanity is a just place holder because we are custom designing ours. Since I made this board we have decided to go a more modern route for the vanity because I fell in love with this image: 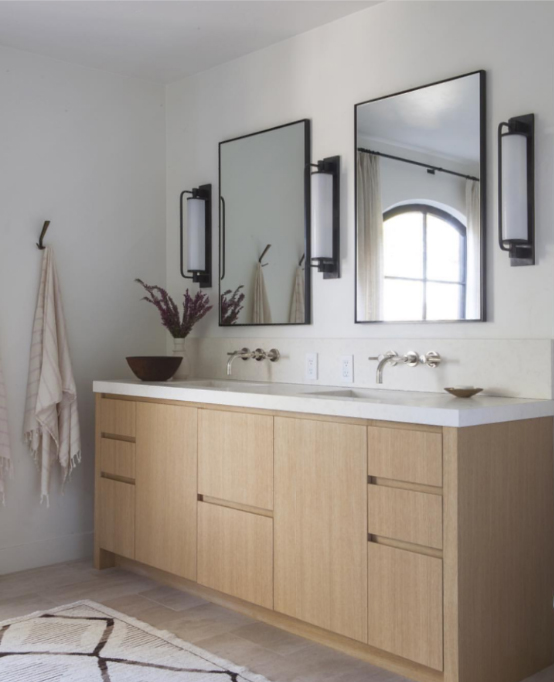 We are building something similar to this in design with some tweaking – I wanted to keep the cabinetry really sleek and simple in here and let the tile do its thing. We are also doing shaker cabinets in the kitchen and I wanted something different in here.

We had a lot of fun sourcing tile for this room. I had already decided on the Artistic Tile mosaic for the floor and we built the rest of the scheme around that. I wanted to do whites in the shower but it is SUCH a big shower that it needed some variation and changes in texture to break it up. I came across this dual-finish thassos 2×6 and it was obviously such a winner. It alternates between rough and polished thassos and it is seriously stunning in person: 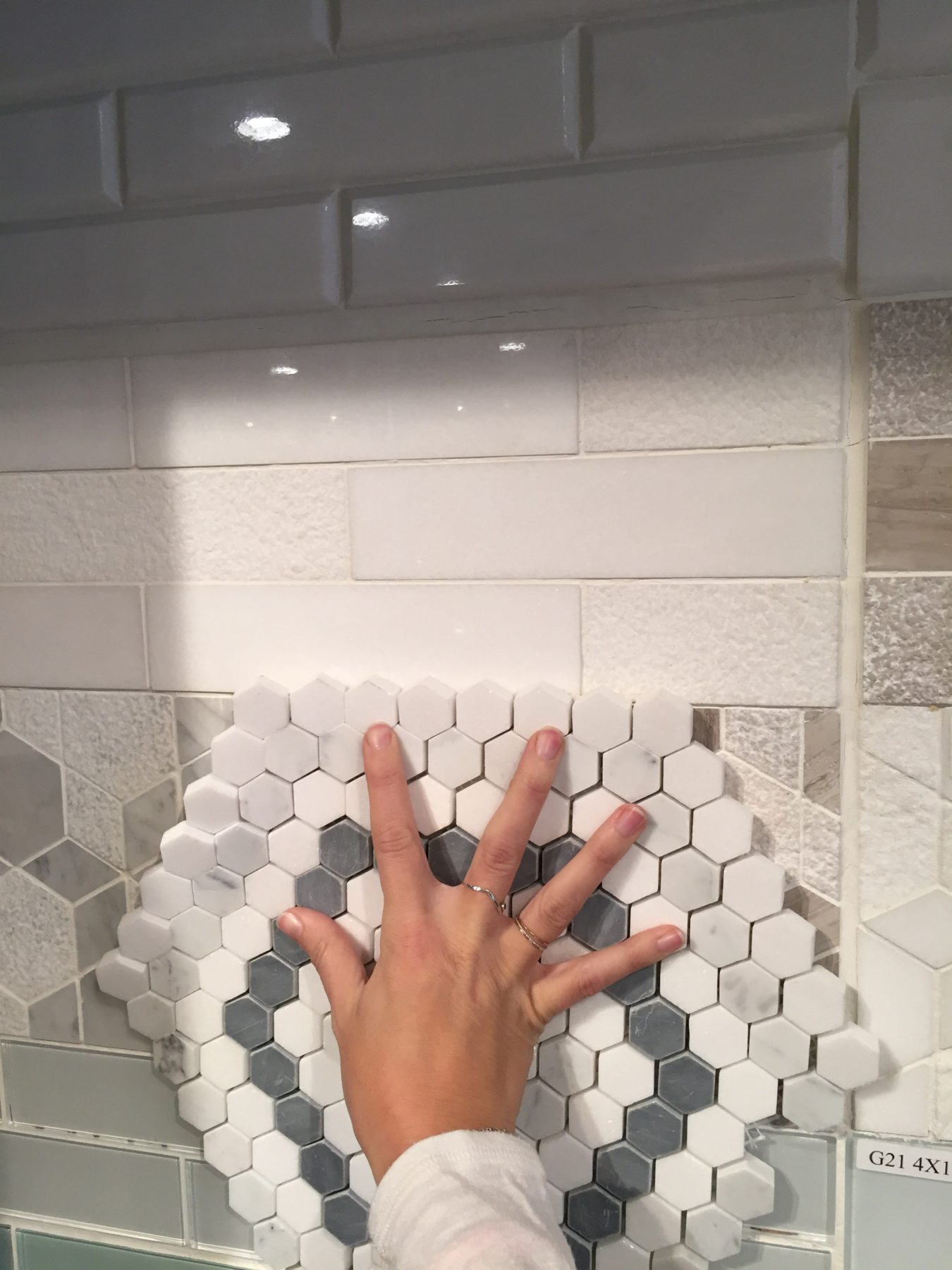 I knew I wanted to do penny tiles for the shower floor because they give a good grip and I get nervous about people slipping and falling (mostly me). We decided to do a platinum grout to pull in from the grays in the Carrera floors: 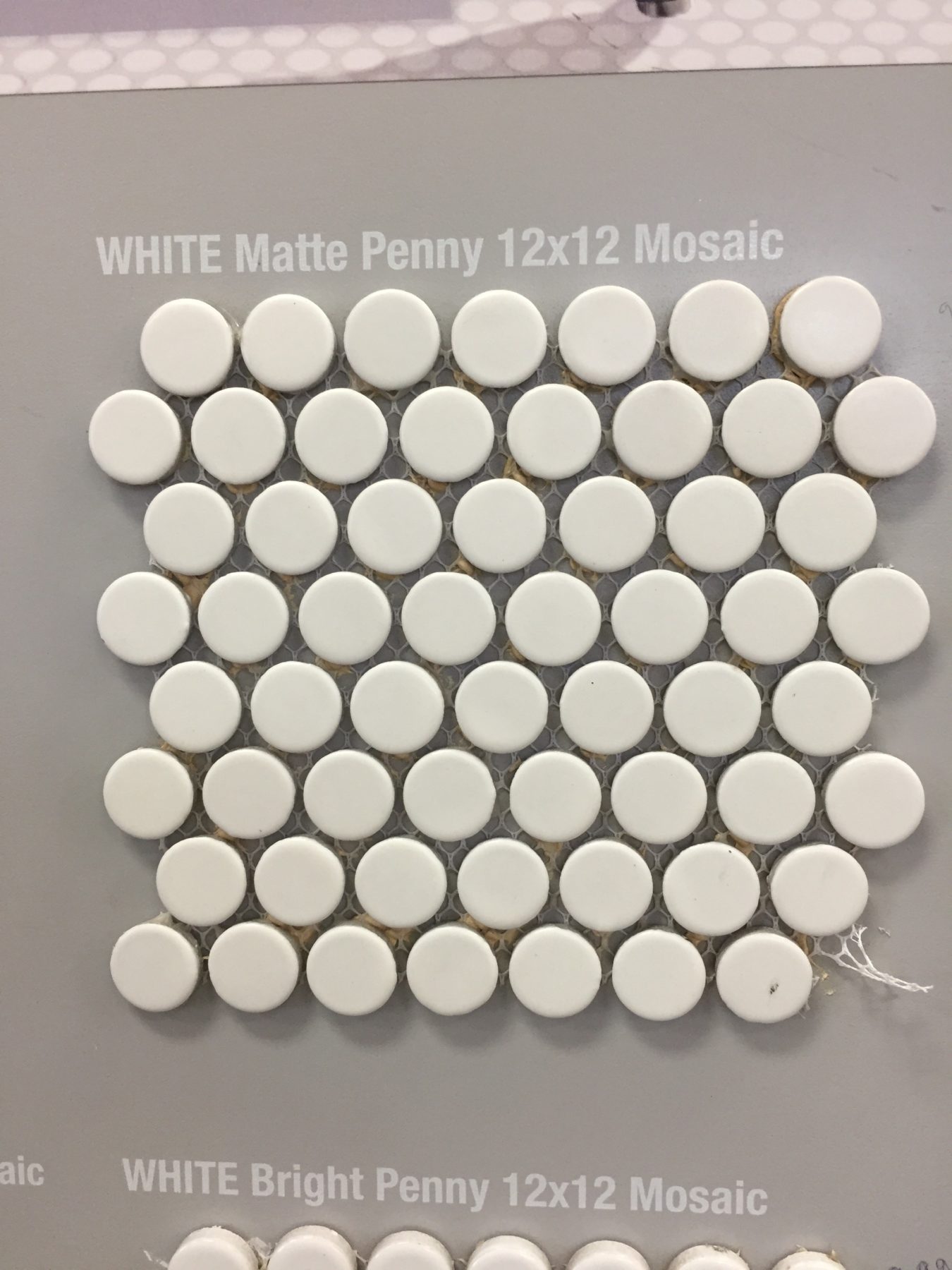 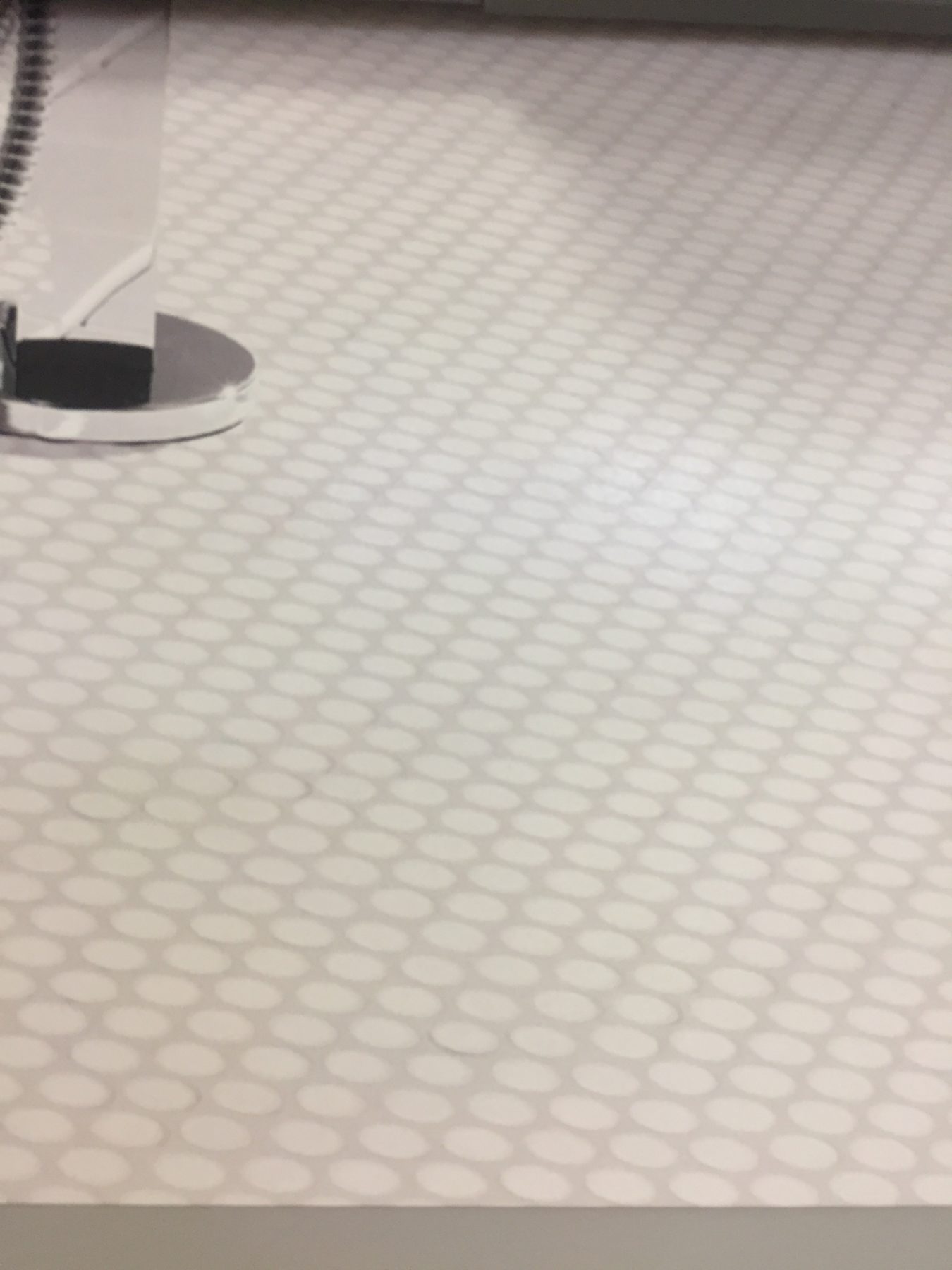 We also decided to add a border to the mosaic floor tile because I thought it would soften the boldness of the pattern – in my mind it was a way to phase it out towards the edges. We chose a large Carrera hexagon as the border and a porcelain marble to use as the shower curb: 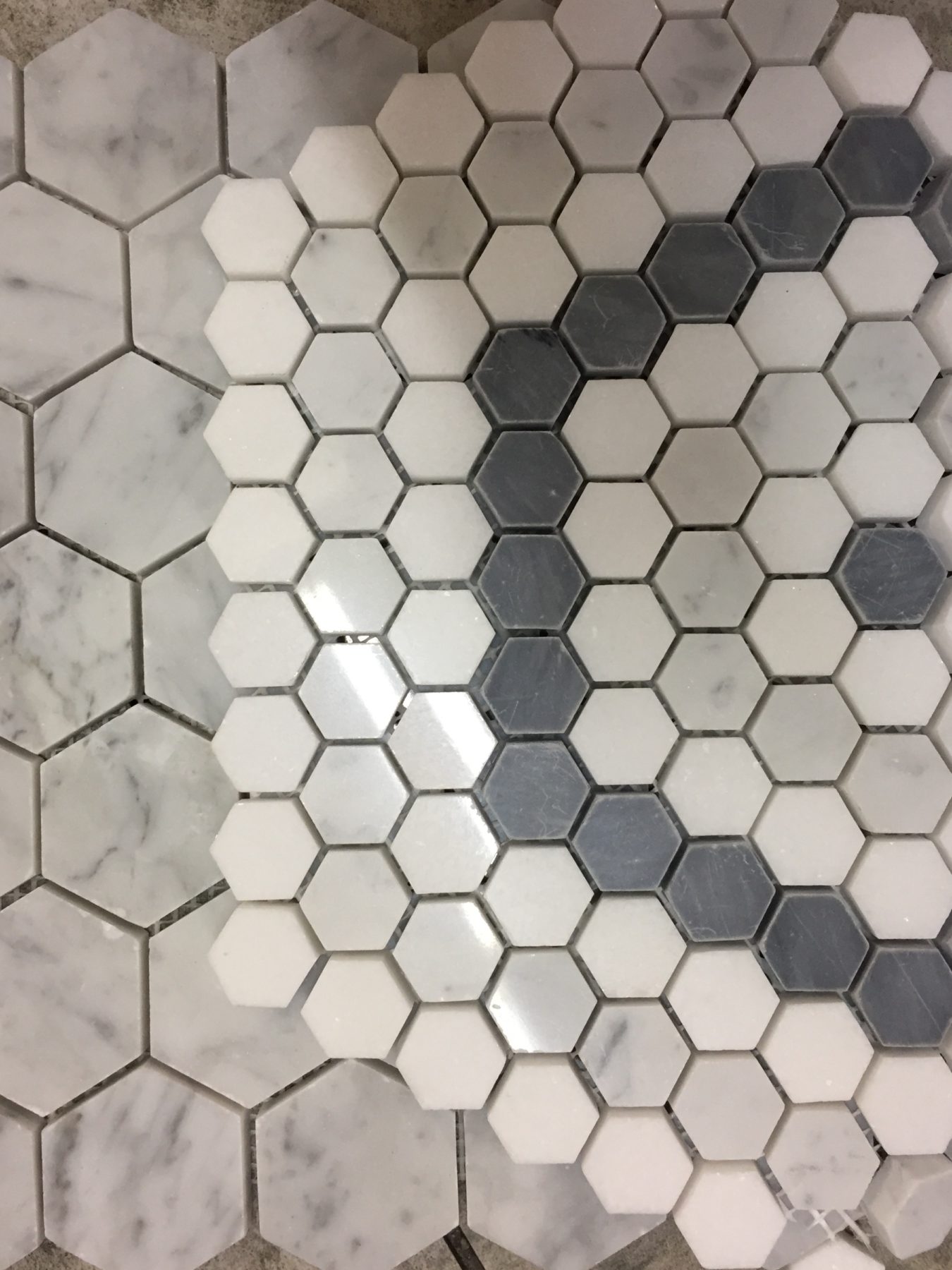 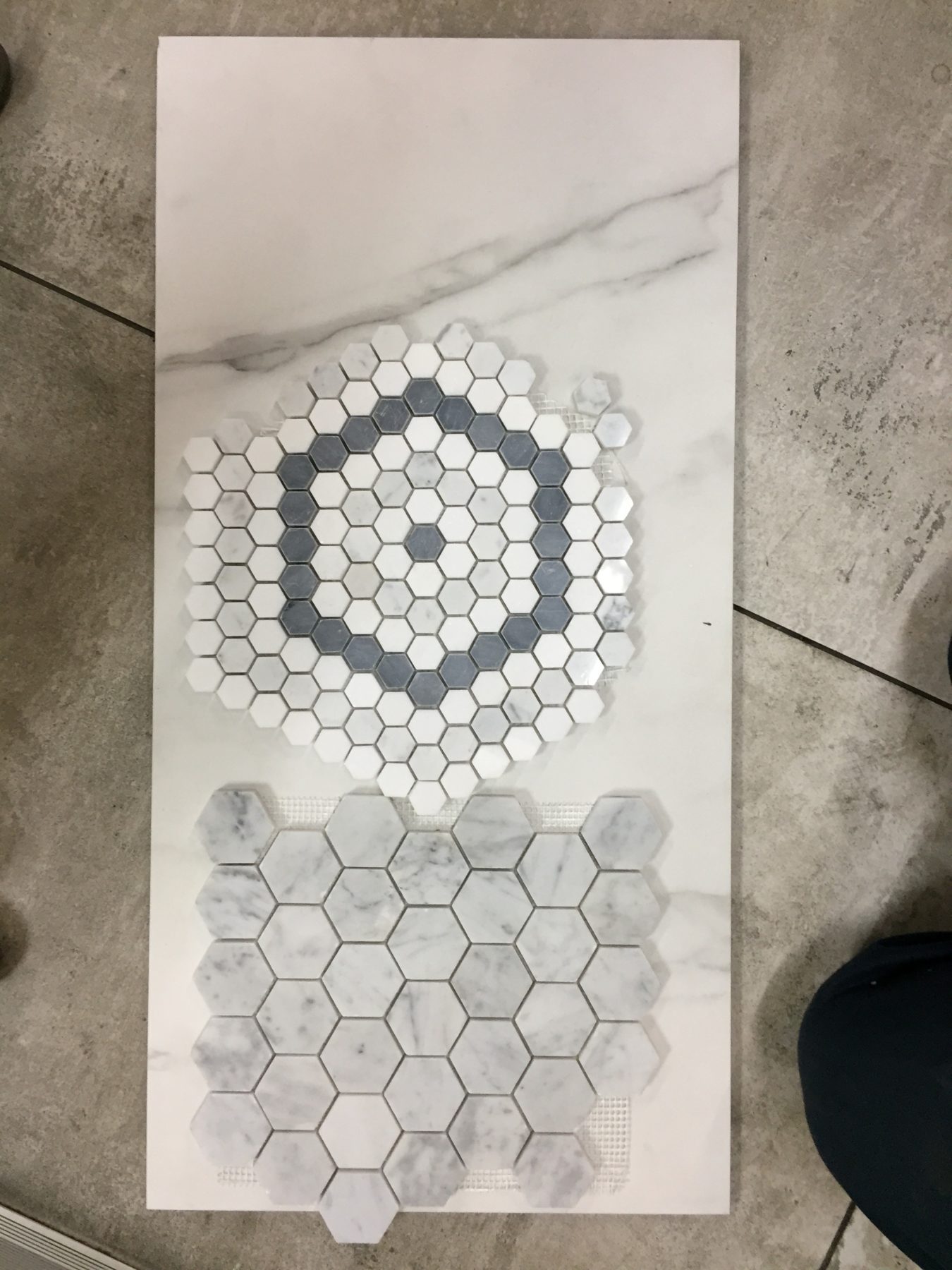 Last but not least, we found a pre-fab Carrera slab for the vanity top – YAYYYY I was so happy we were able to snag that: 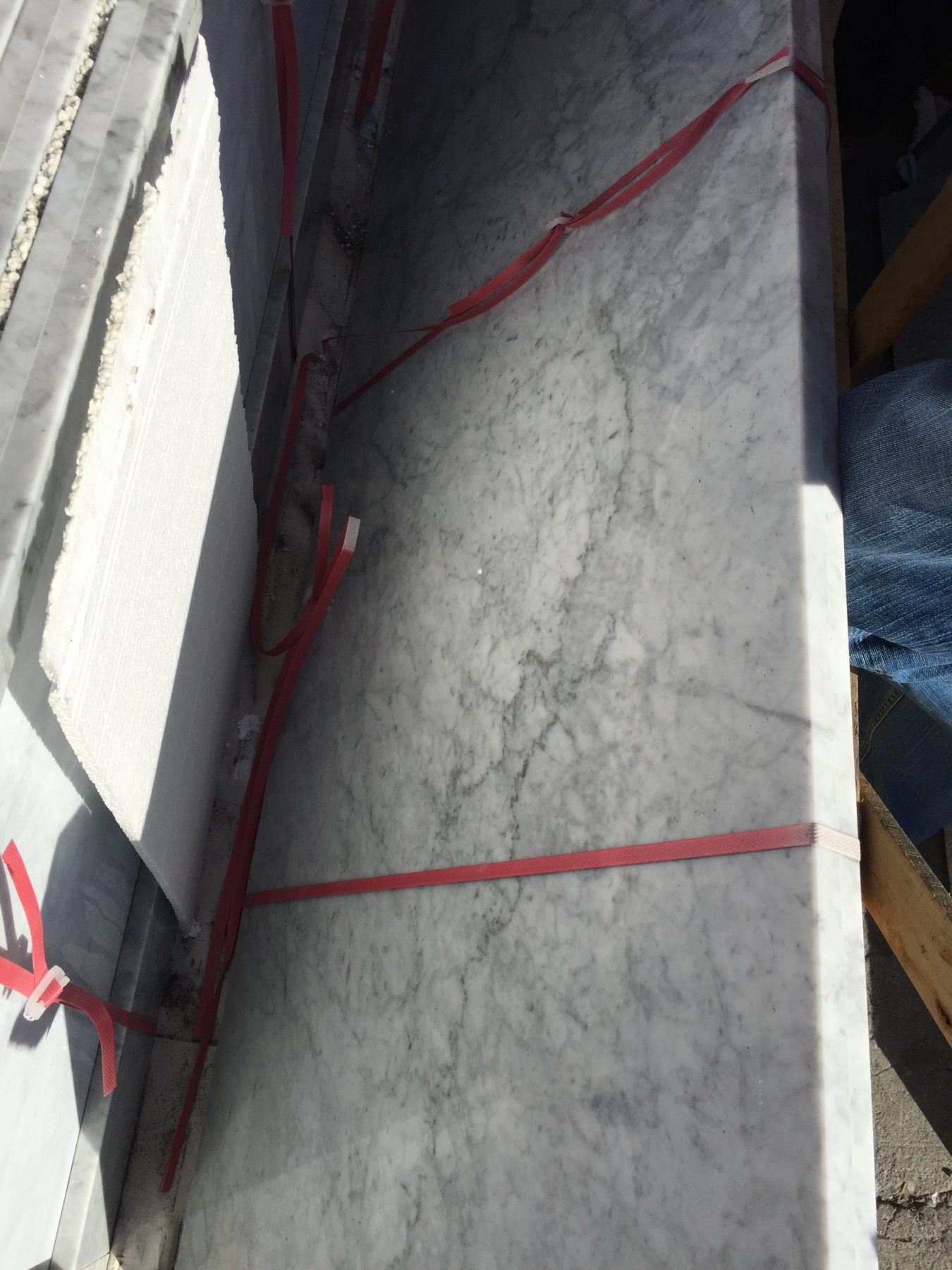 I felt like once I made the choices and bought all the tile that I had done the right thing but I was SUPER. NERVOUS. This is not your typical bathroom and I don’t want it to be, but taking risks can be scary. They started laying the tile in the shower last week and I was still feeling kind of wary: 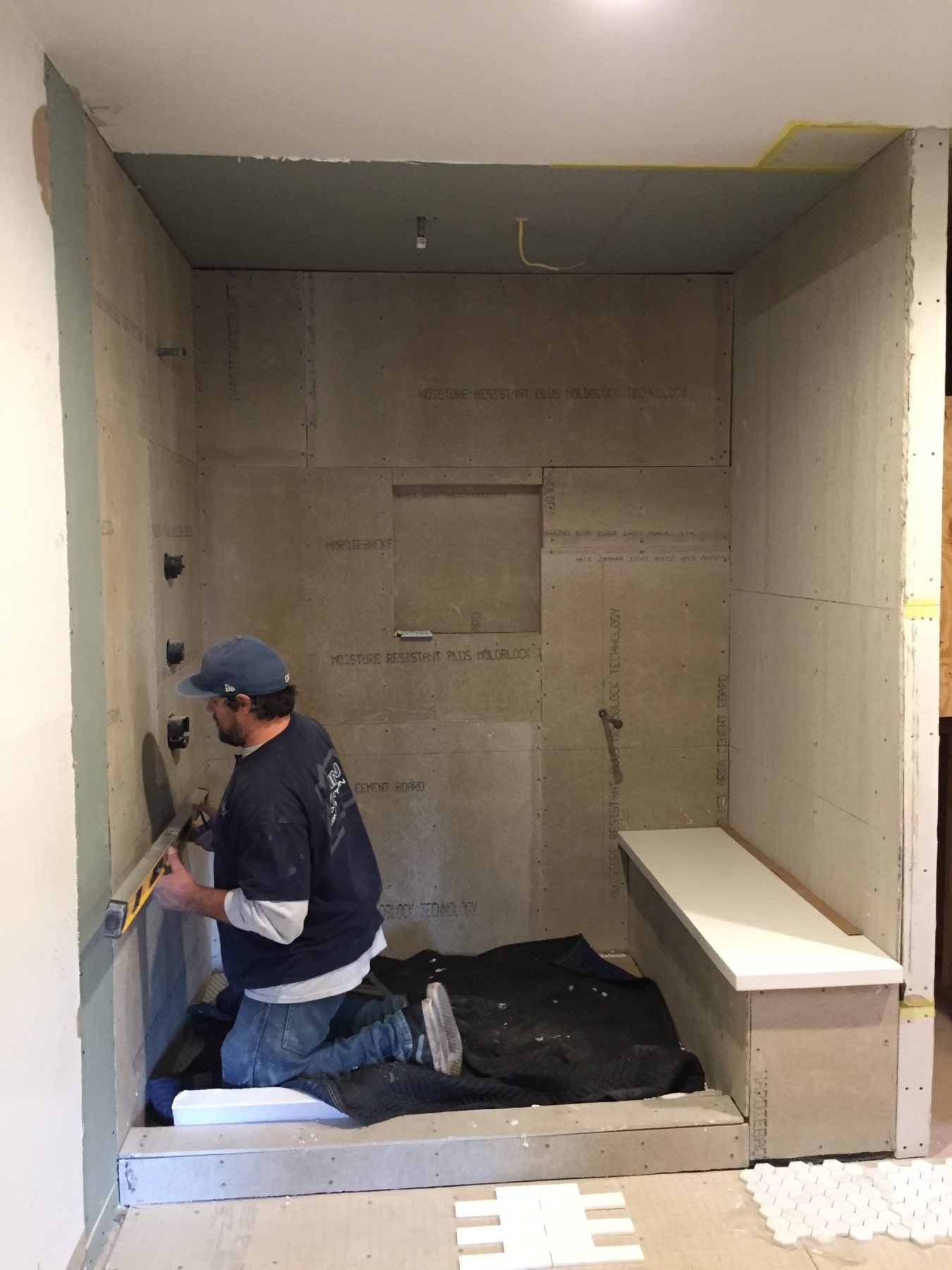 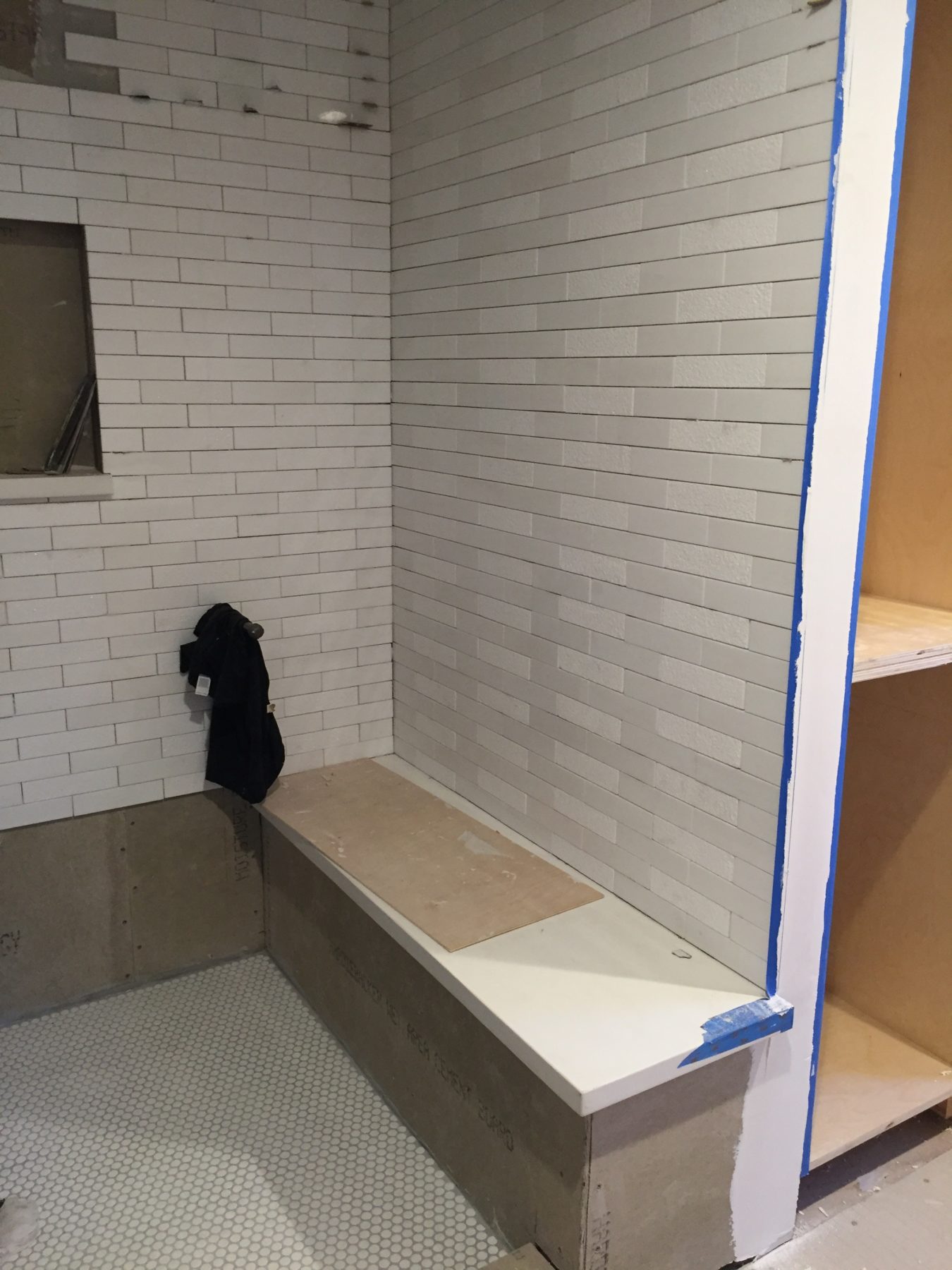 Tile is really hard to fully grasp until it is ALL installed, grouted, & finished. I liked the thassos but without the white grout I couldn’t really see it…until TODAY! My jaw dropped when I saw the final product (minus the fixtures): 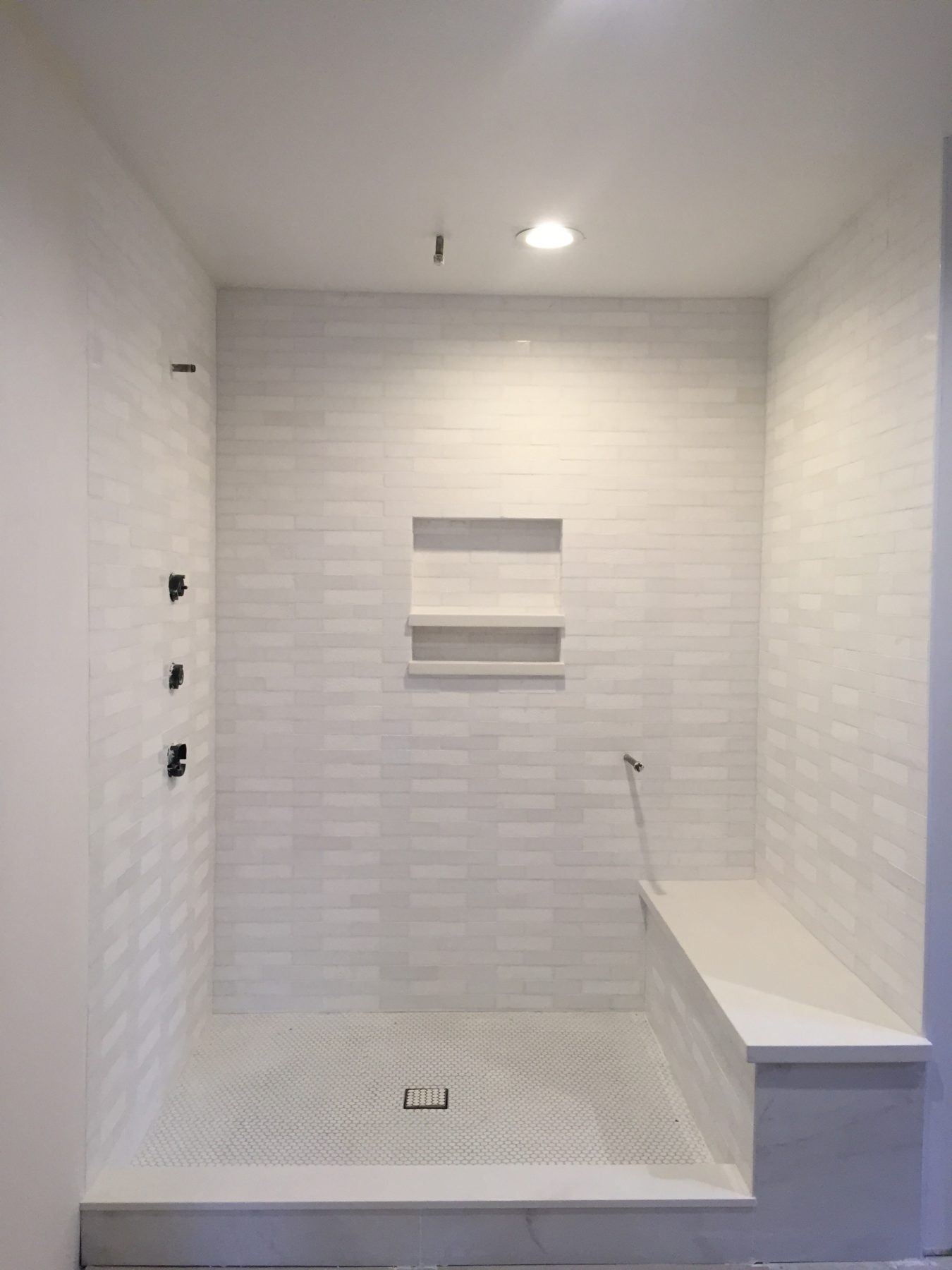 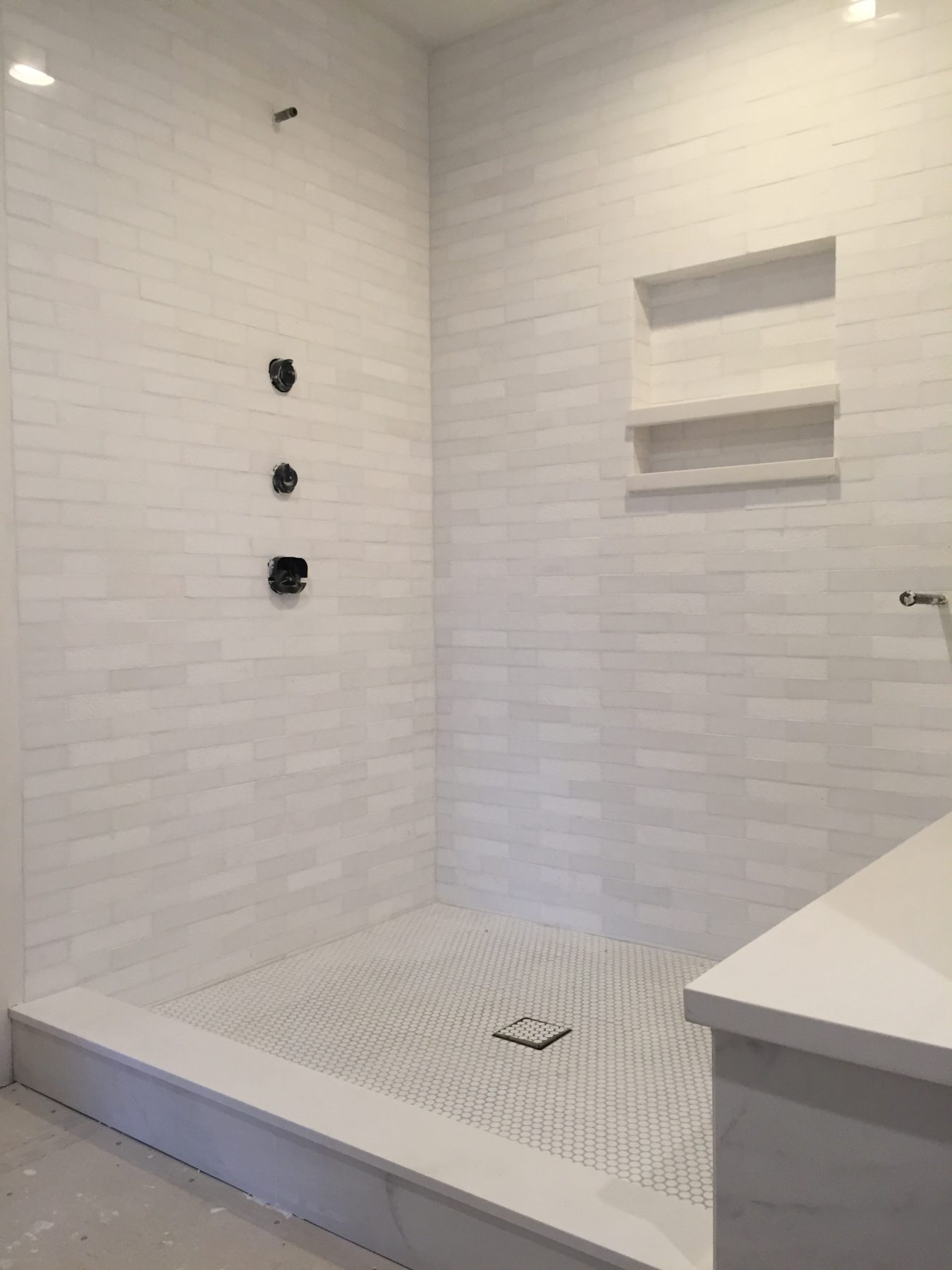 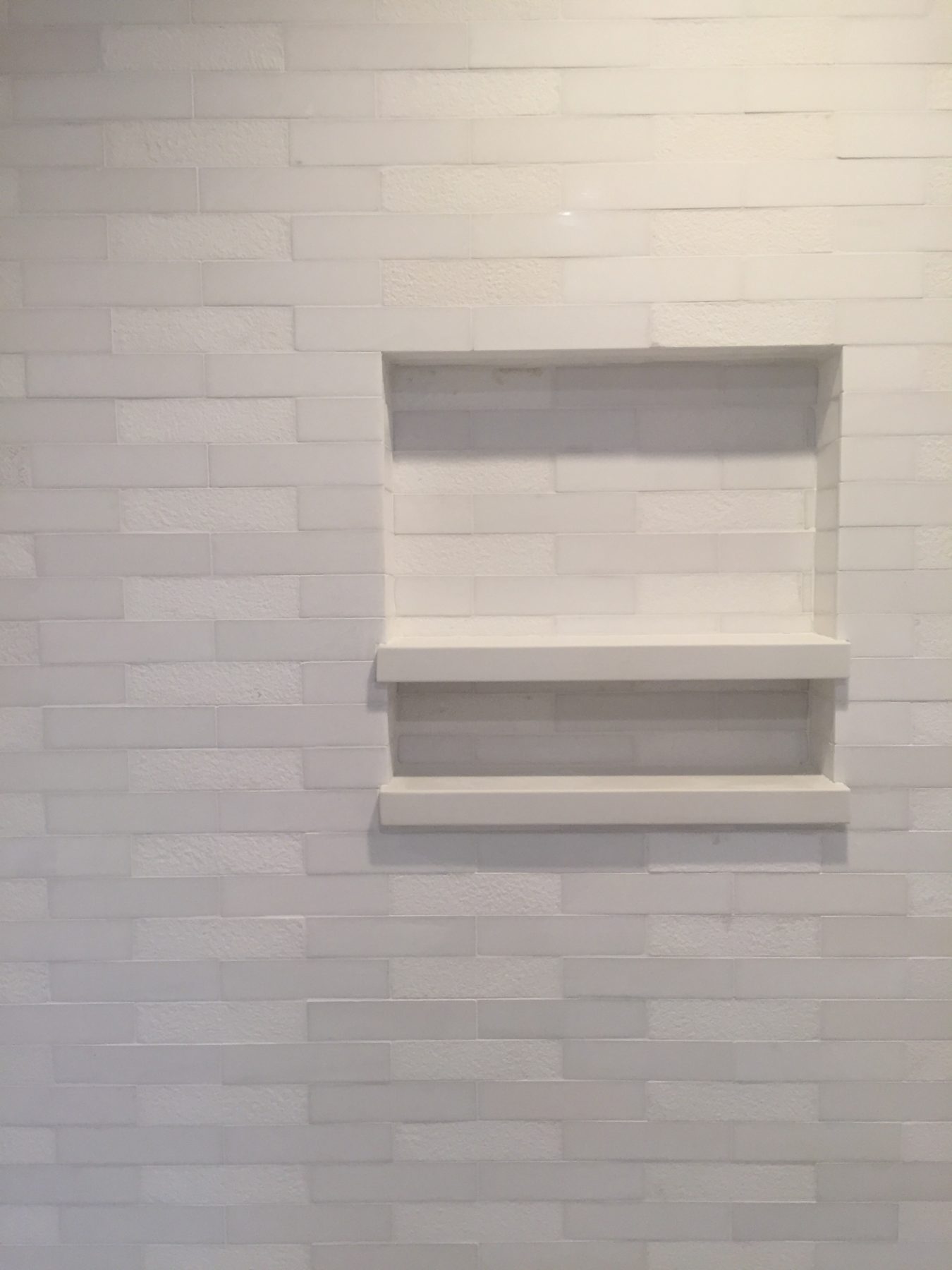 Its almost too pretty to touch. And how cute is my shampoo niche? We had some leftover white quartz from our kitchen slabs so we used it for the bench top and shampoo niche. The shower floor was also just as I’d hoped (tile in drain still needs grouting): The platinum grout was definitely the way to go. Now the last piece (besides vanity which isn’t ready yet) is the BIGGEST piece – the mosaic floors. We started laying it out today because with the border it is a tad complicated. Seriously though, it looks AMAZING. I cannot wait to sit there and watch them install it like a total psycho: 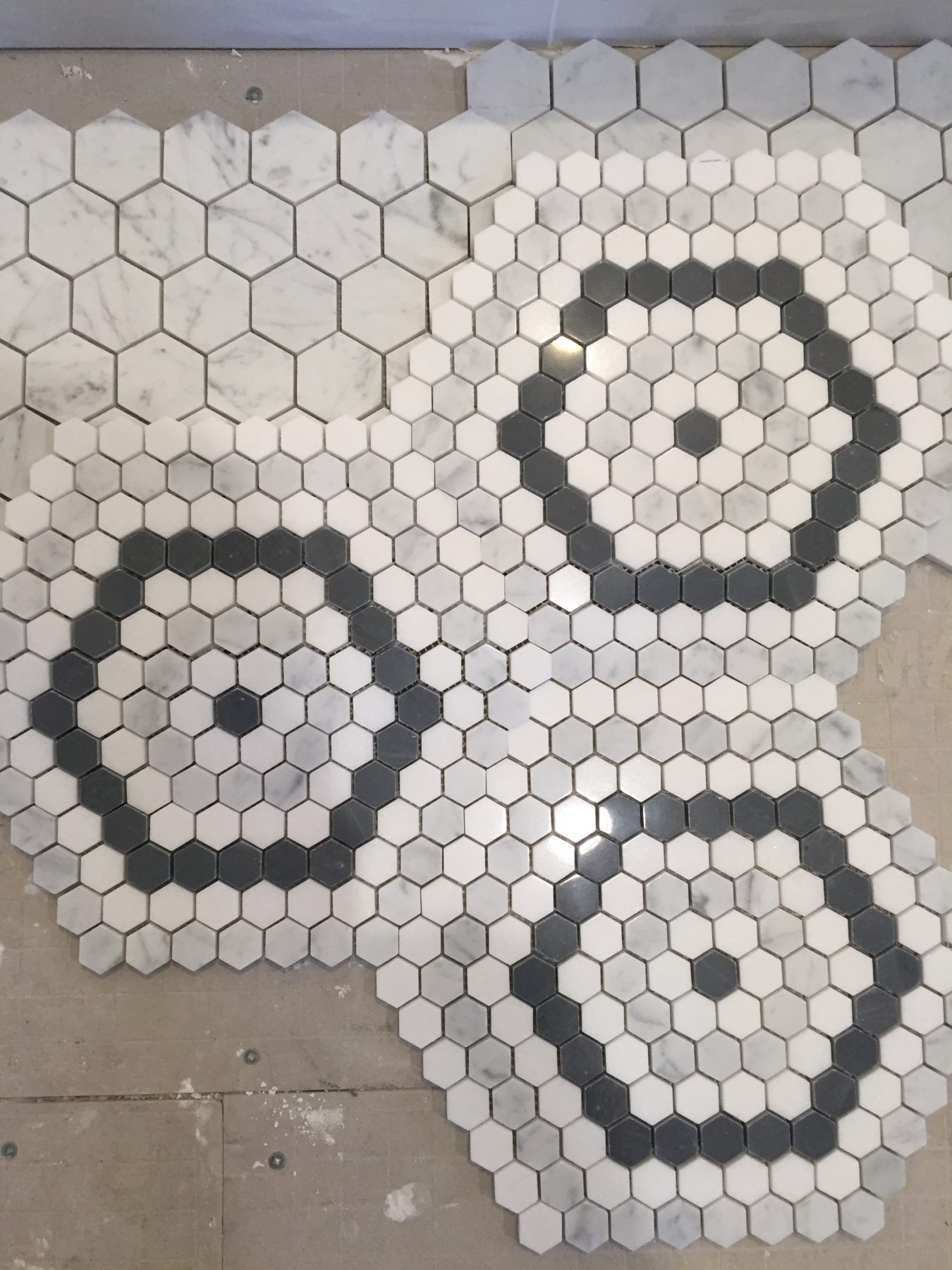 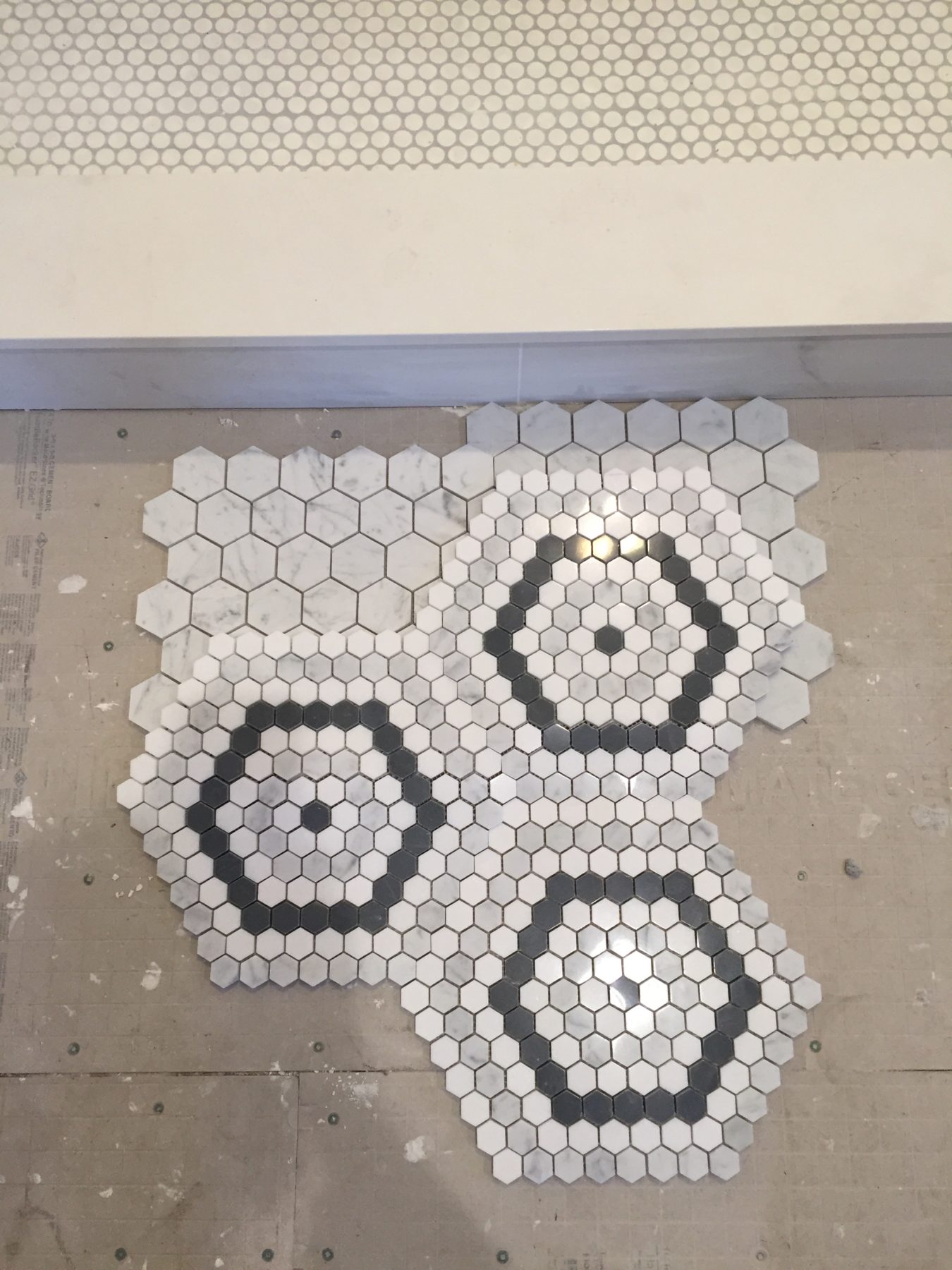 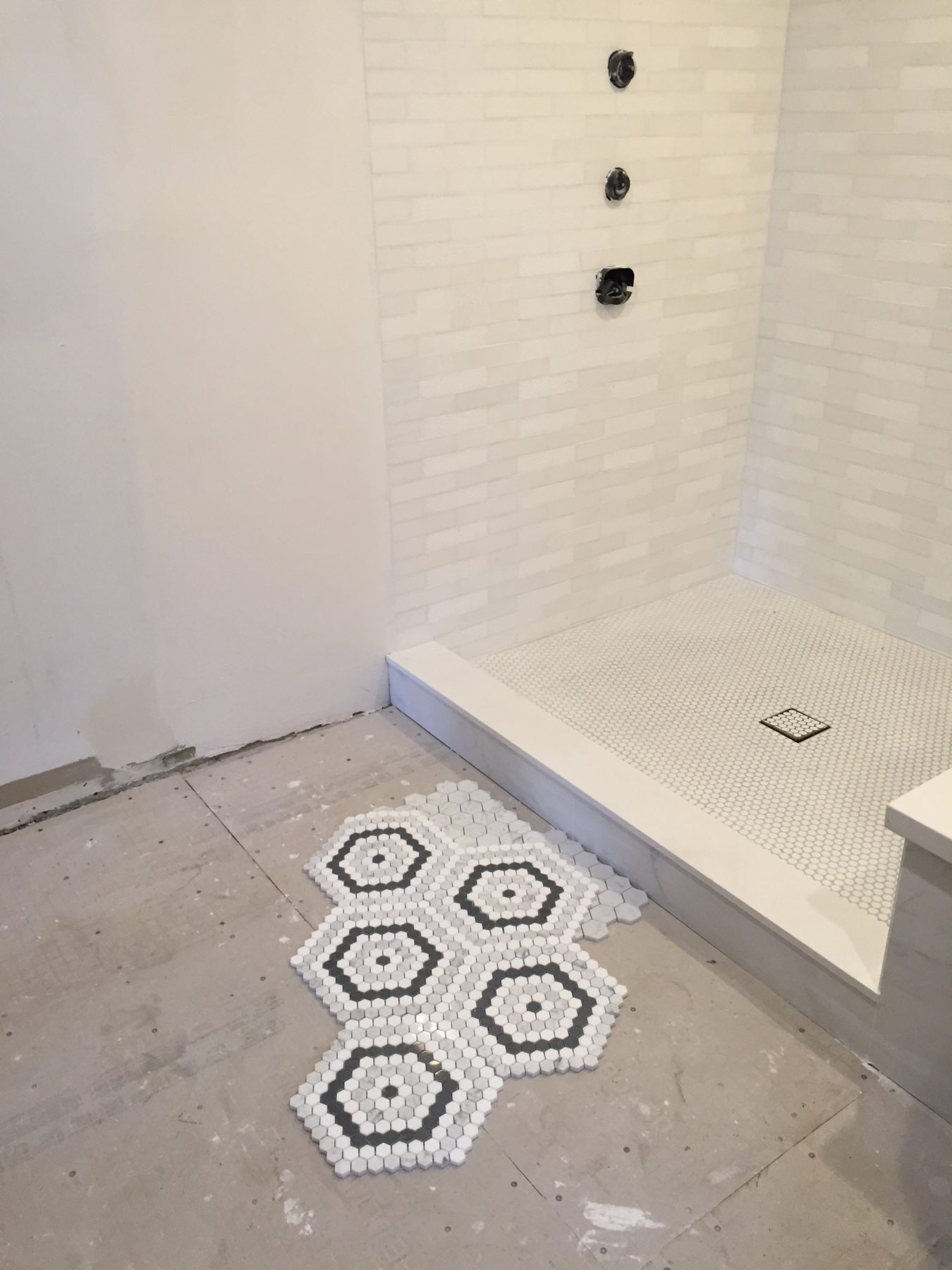 That last show really shows how the room is going to come together. And I can’t wait to see how the wood on the vanity and the linen closet add some warmth to the space. I will give you guys an update on the jack & jill bath next week – stay tuned! xo, AE

A design & lifestyle blog by Los Angeles based interior designer, Amy Elbaum. Follow along for updates on current projects, inspiration for new ones, pictures of pretty things, and an occasional family photo.