Never have I been so excited to receive pictures of partially broken down walls and a house (my house) looking like a total disaster zone. But when I got a text from my contractor with photos of what happened during day 1 of demo, I was over the moon. This house has an amazing layout but there were so many walls, it was almost hard to figure out where you were. During the open house the brokers were giving out floor plans so you understood where you were in relation to the rest of the house. It took me about 2 minutes to figure out that taking down a few of those existing walls would change everything. I prayed to the gods that there would be no load bearing walls or annoying beams in my way (will get to that later) and we laid out our game plan.

Here are some photos what the dining/kitchen area looked like before: 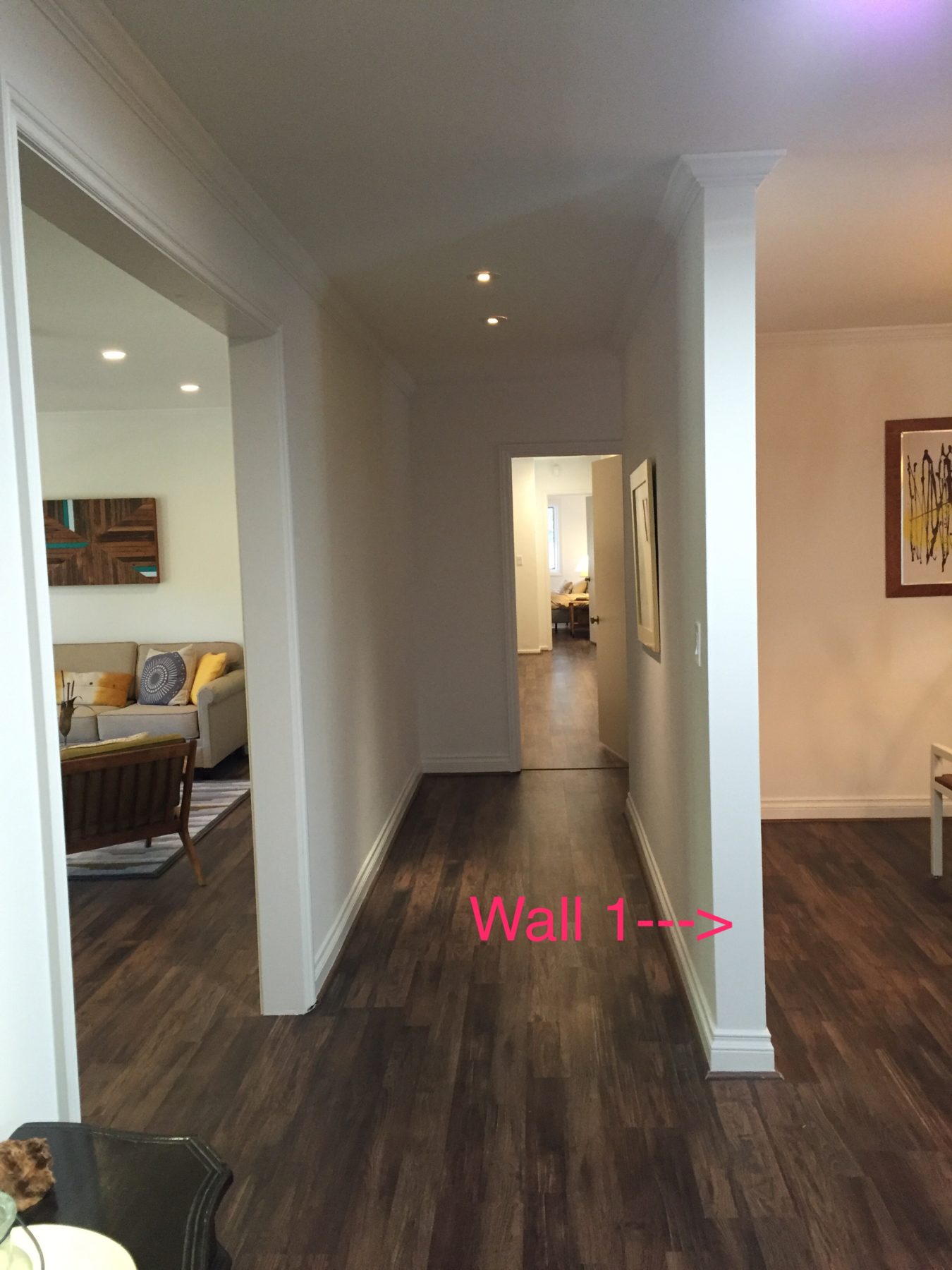 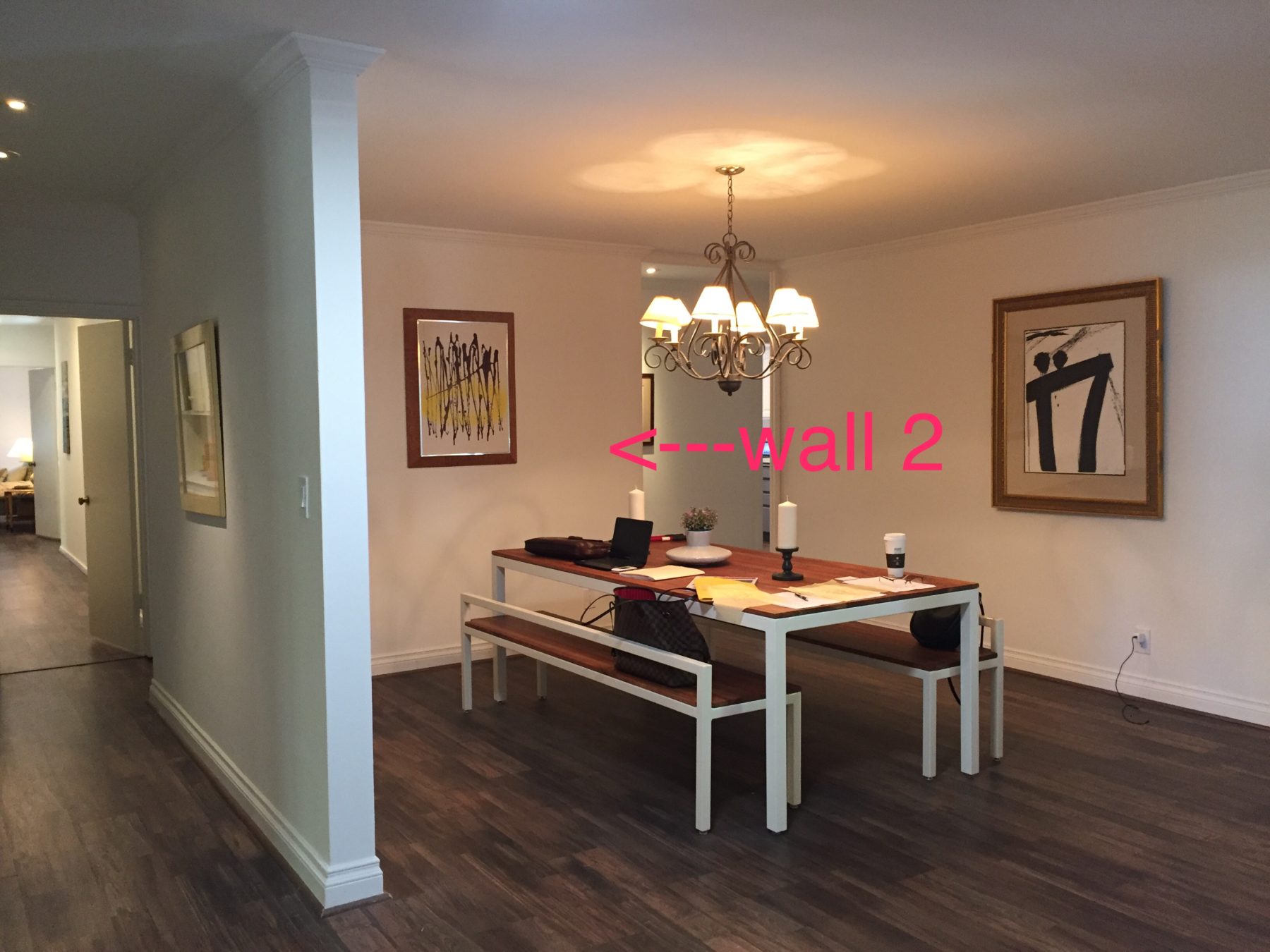 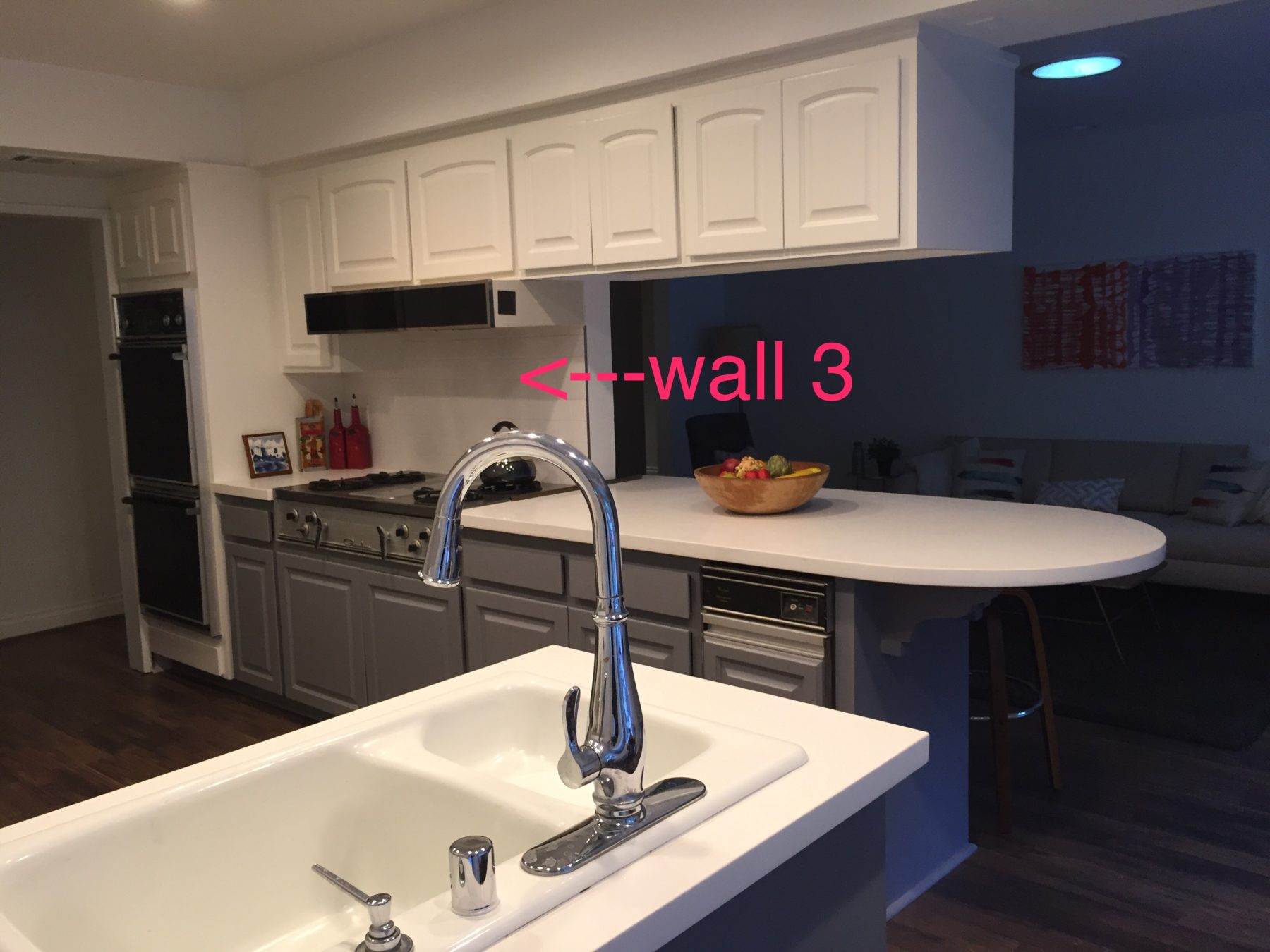 So those are the 3 walls that are coming down. Here is what it looked like after day 1 of demo: 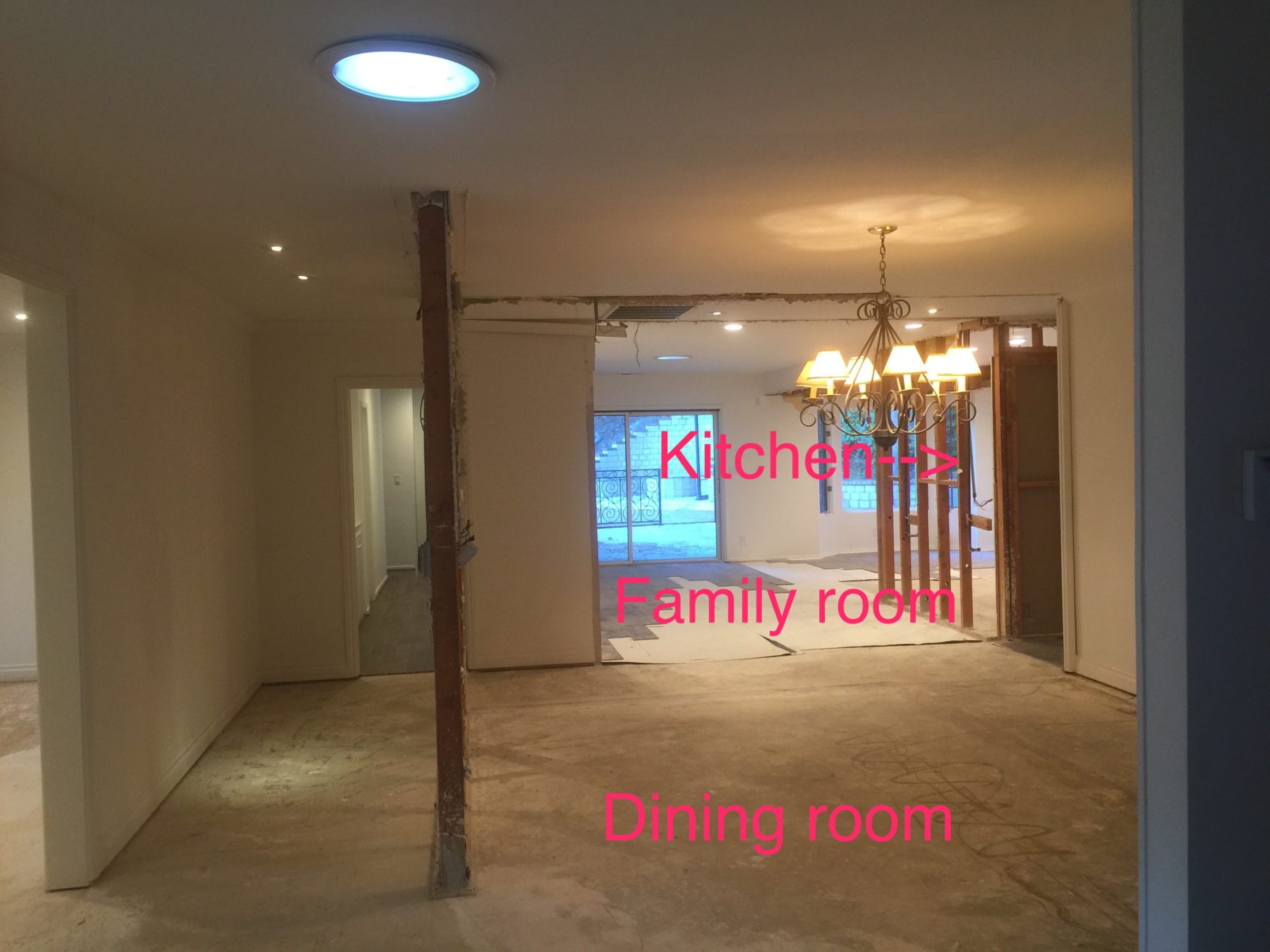 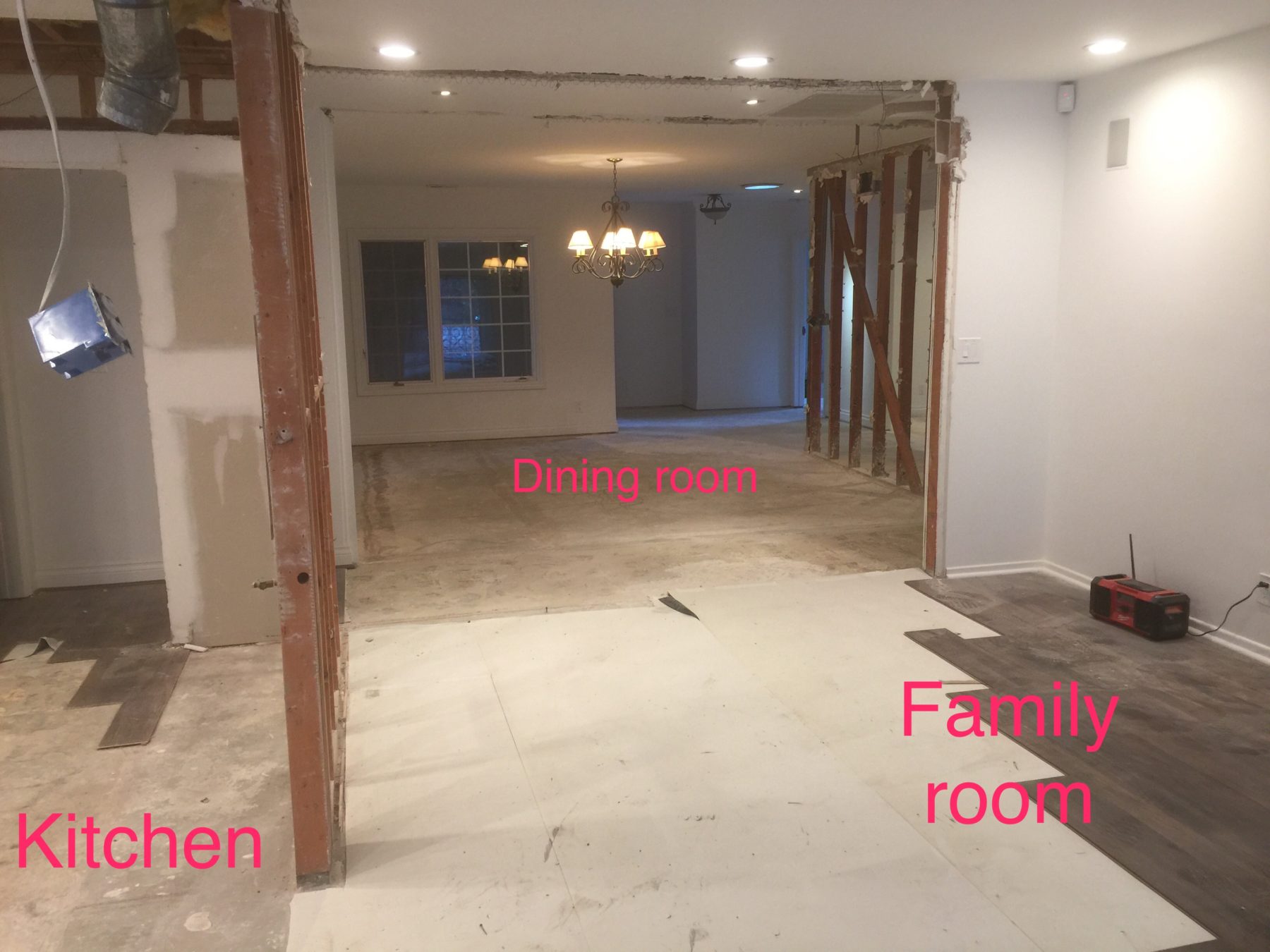 When you first walked into the house, you couldn’t see the kitchen because there were these 2 (non-load bearing) walls that created a dining room. It was so odd and ridiculous and I was jumping up and down when my contractor told me those walls served no purpose and could come down asap. Now when you walk into the house, you can see right to those big bay windows where the kitchen banquette will go in the not so distant future.

Of course, nothing ever goes smoothly in this world, and we knew we were going to encounter a problem with wall 3 (the partial wall in the kitchen). That wall is unfortunately supporting a very important beam….cue the tears. I was literally devastated about this and refused to design any sort of post or wall or structure to support this alleged “beam” until we learned more about it. Here is what we found today: 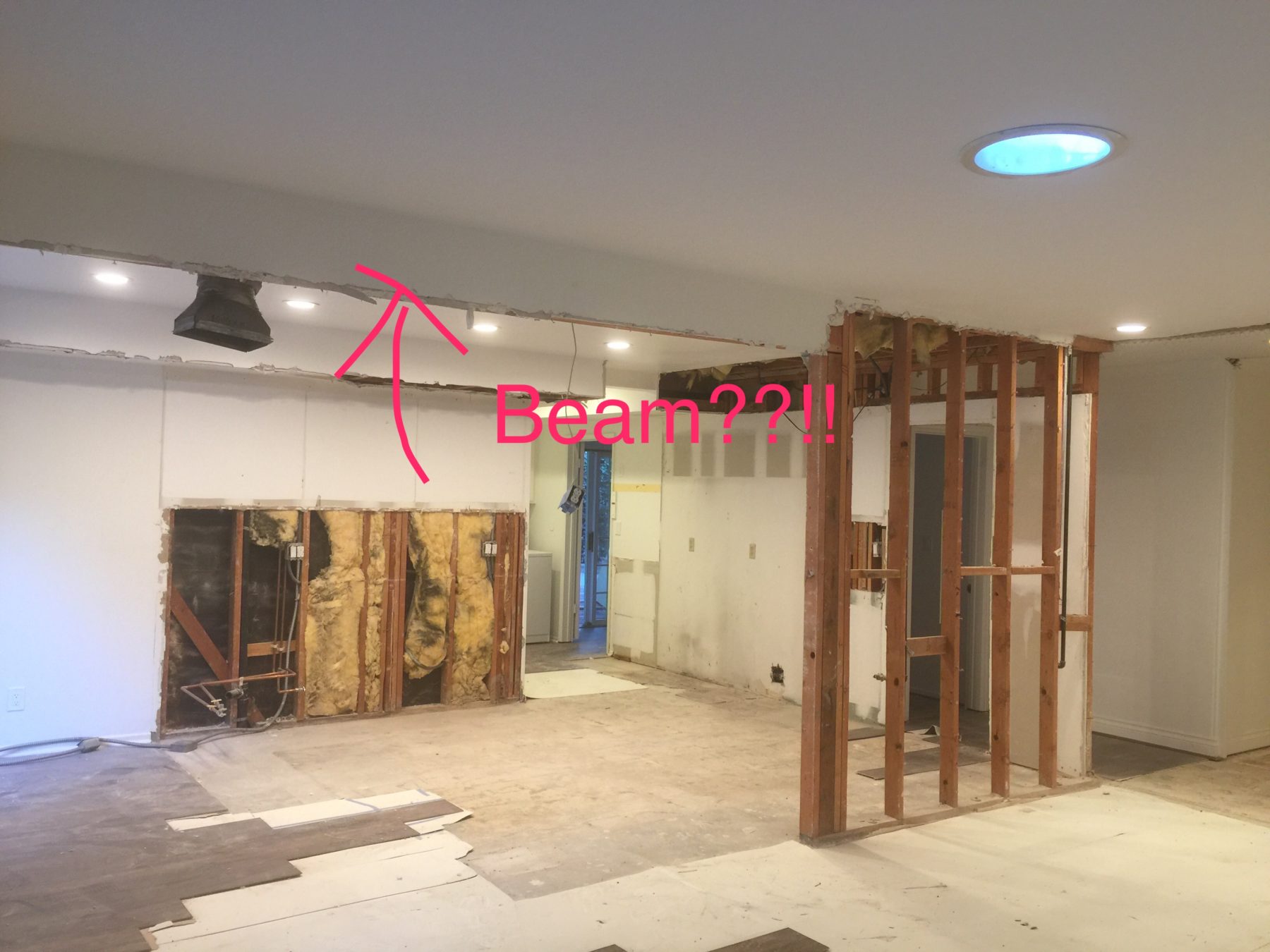 So, there it is, this hypothetical beam my contractor has been telling me during his trips into the attic (which I refused to join him in). BUTTT I did get some good news – yes we have to keep the beam but if we make the beam bigger – right now its just a 3.5″x11.5″ box covered in plywood – then we wont have to add any structural support aka an obnoxious post in the middle of my glorious kitchen! I told my contractor I was crying tears of joy and I think I freaked him out a little bit because he hasn’t been responding to my texts since then…

So having an exposed beam in the kitchen is really not a bad thing. Beams can be cool! Now I have to decide how I want the beam to look and how I want it to relate to the rest of the room. Do I want to make it a cool rustic beam? Do I want to turn it into a coffered ceiling? Do I want to paint it white and try to make it go away? To be honest, I have no idea. Let’s look at some options:

Cool, rustic, exposed beam (make it look like we uncovered something cool but really we are going to be adding it in): 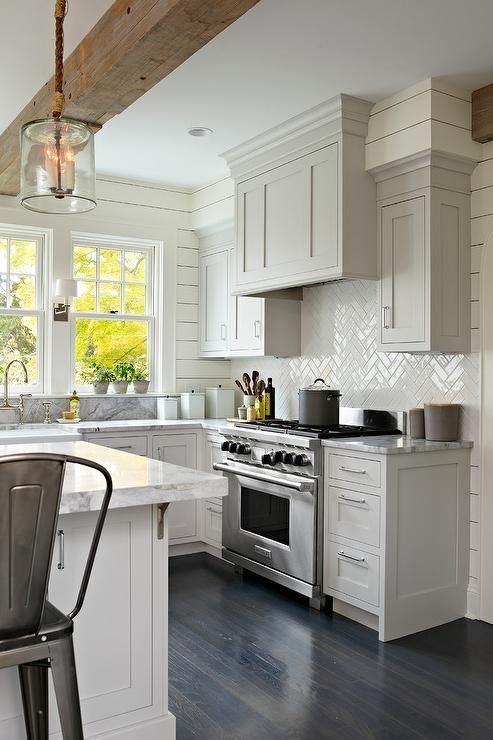 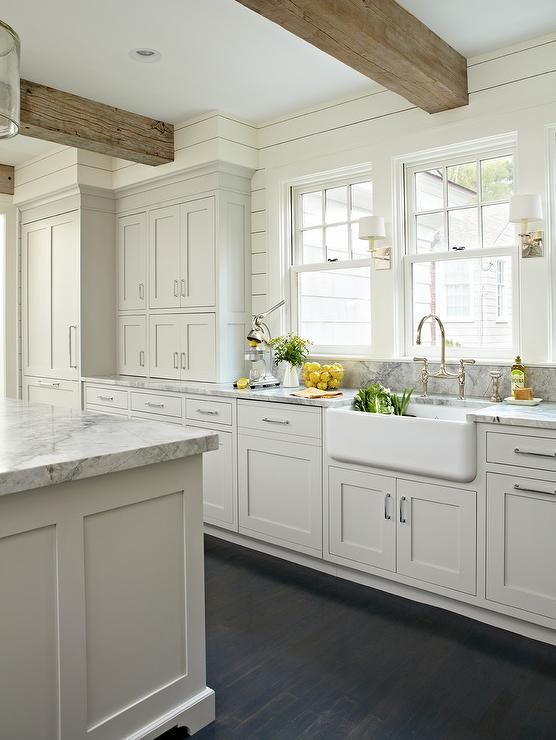 Here is a kitchen which is actually somewhat similar to what mine will look like – soft gray shaker style cabinets – but mine will be more modern with less ornate moldings and without the shiplap detail. These rustic beams are perfect in this space, they are soft and they work well with the “farmhouse” style of the room. I like how they contrast with the dark floors too. 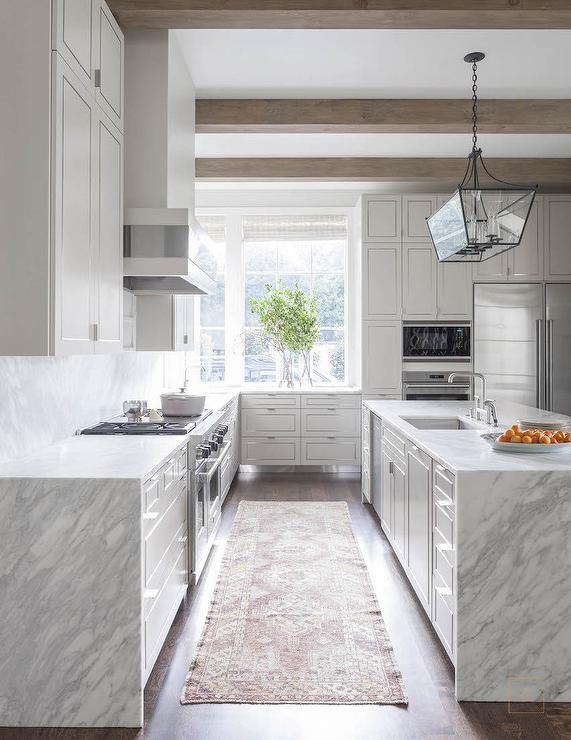 This kitchen is WOW. I mean, the marble waterfall edges are to die for. But lets focus on the beams here – this is a fairly modern kitchen, and although the beams are a somewhat washed out wood, the lines are super clean and they only enhance the feeling of the space. They appear to be slightly lighter than the floors which I think works nicely. This may be a good inspiration image for our kitchen. 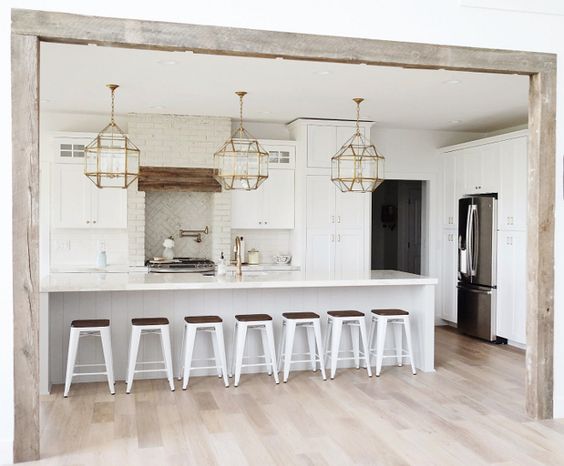 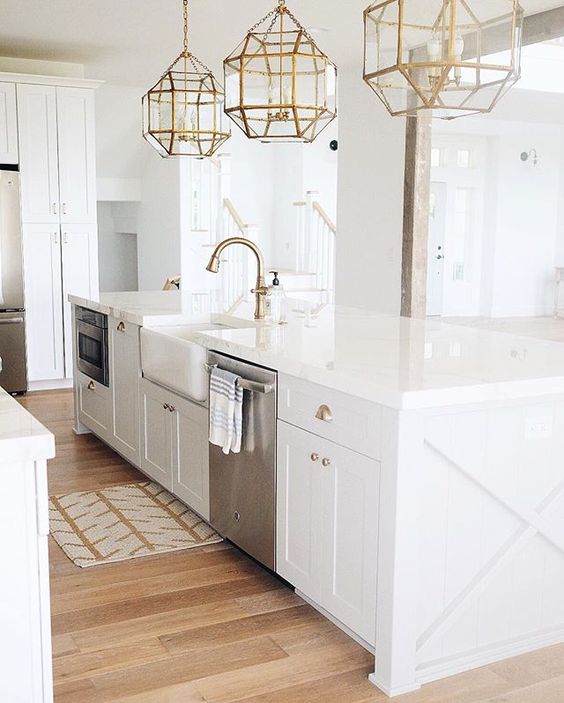 This makes me want to do an all white kitchen ASAP. How amazing is that framed opening with the rustic wood?? Its stunning with the all white and brass kitchen. I love the idea of bringing the beam down and wrapping it around like a frame, but I’m not sure I have the room to cut away at the open space I have (plus we just opened it all up so why would I close it back up?). It does make me think about how to incorporate the beam into something bigger though.

Make it disappear (paint it white):

Painting it white and adding some pretty architectural details is a great option. That way it isn’t stealing the show but its also adding some character to the space. Here is an example of a white beam with very nice details that gives the space a really sophisticated feeling: 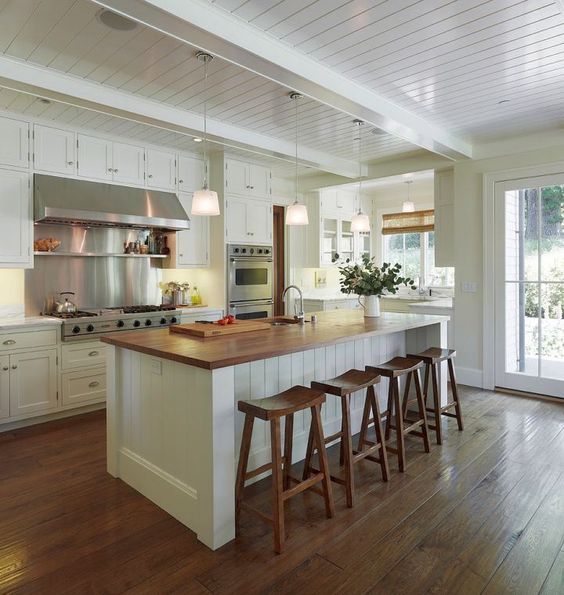 That is really some beautiful work. The paneled ceiling doesn’t hurt the overall look, but I like how the beams have an interesting yet subtle design to them. 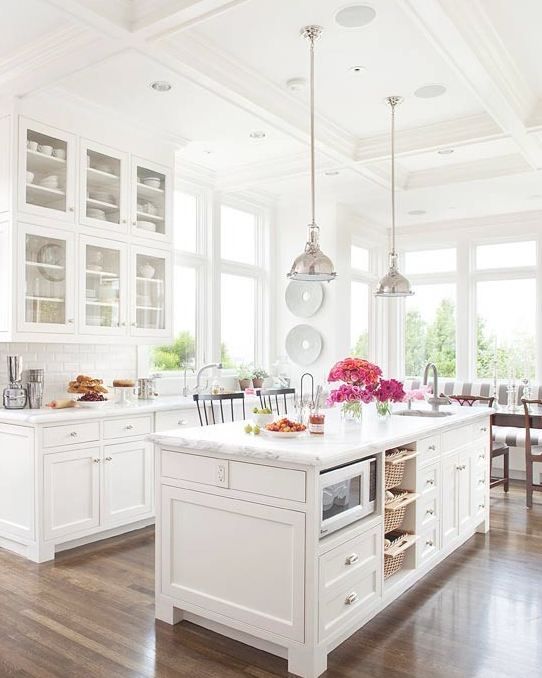 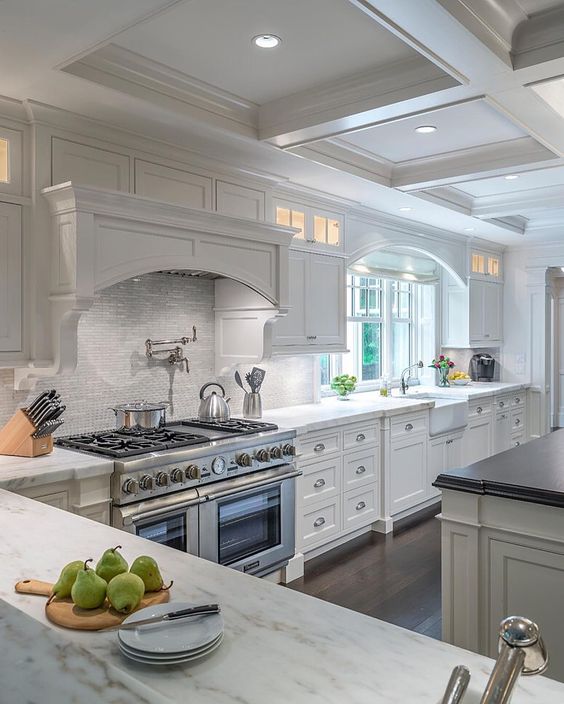 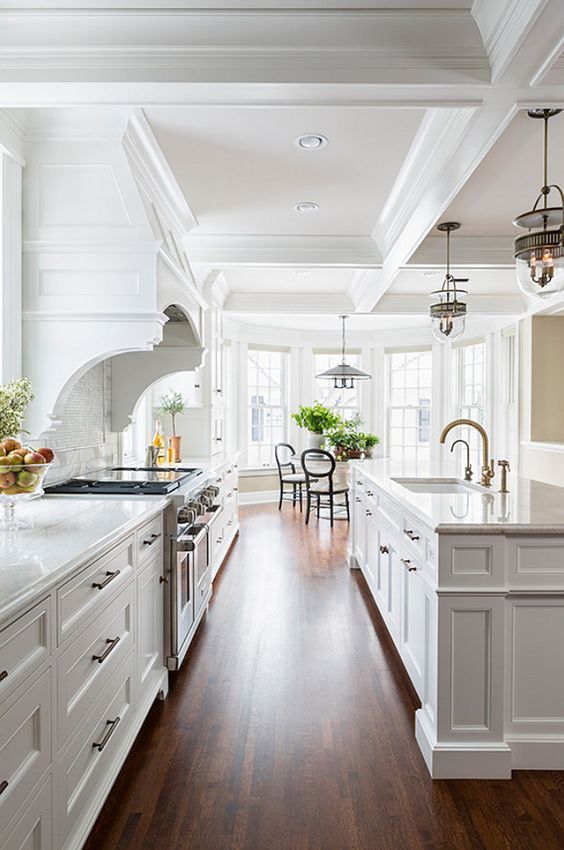 These ceilings often lend themselves to a more traditional space, with elaborate moldings and details. Considering we have 8’2″ ceilings and most of the house has NO crown molding, this doesn’t seem like an option for me. Not to mention, there is a lot of cost involved with doing all this detailing which likely wont fit in our already exploding budget.

The opposite: make it dark

To be honest, I’m not sure I would have the guts to make my beams and ceiling dark like Brittany, of the blog Addison’s Wonderland (please check it out – she is restoring/renovating a 1905 house and it is unbelievable), is doing in her home. I will say that it is stunning and magical and every other complimentary word I can think of. 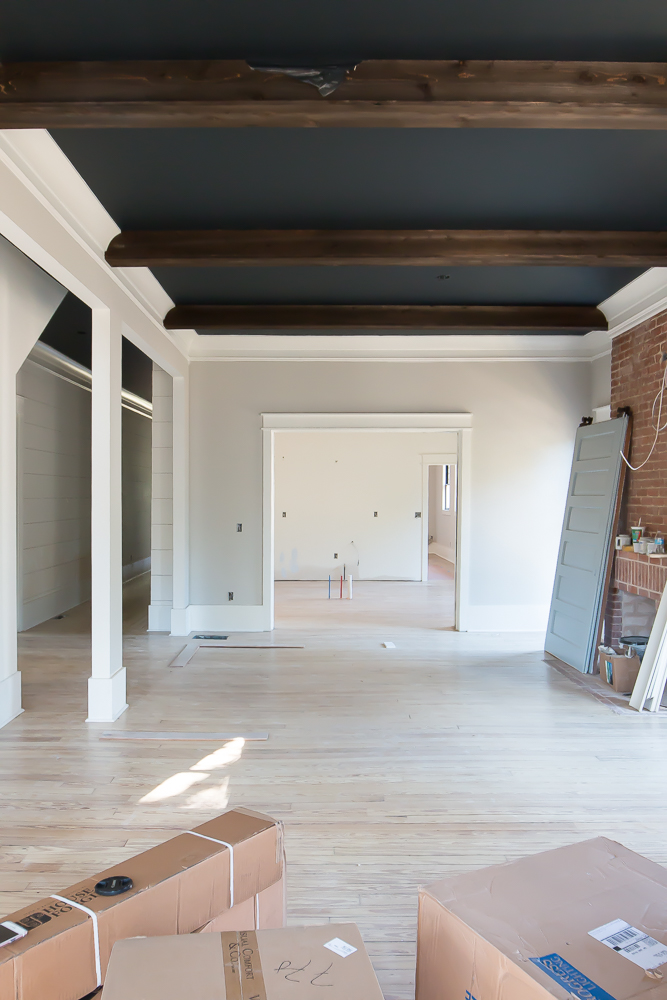 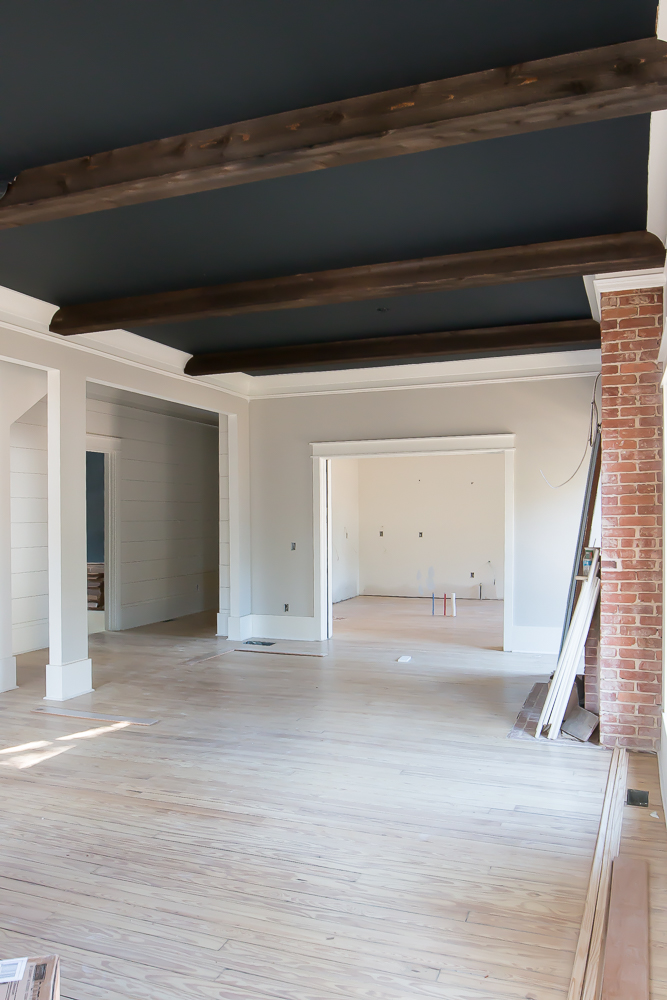 Her floors are really light, like a white-washed wood, which maybe helps balance it all out, not to mention her 12′ ceilings! I have to say since I started reading her blog it has definitely opened my eyes to the endless options of finishes that can go into a house. I am yet to make a final decision on flooring, and hers is certainly on my mind…

More conversations will have to be had about the parameters of the beam, what size it needs to be etc, before we can make a final decision, but I think we will figure really nice out and my hopes is it will only add to the beautiful open space we are creating. More to come soon! xo, AE

A design & lifestyle blog by Los Angeles based interior designer, Amy Elbaum. Follow along for updates on current projects, inspiration for new ones, pictures of pretty things, and an occasional family photo.